Editor’s note: During the DSES Open House on the weekend of August 11, 2018, three receiver systems were tested on the 60-foot dish antenna. Dr. Richard Russel reports on their successful results, and he shows what we see in our data plots. Some highlights to point out:

The DSES and Society of Amateur Radio Astronomers (SARA) teams installed three different receivers onto the 60-foot dish during the open house.

The Spectracyber was installed on the 60-foot dish during the DSES Open House on August 11, 2018.

The observation shows a significant signal to noise ratio as seen below. 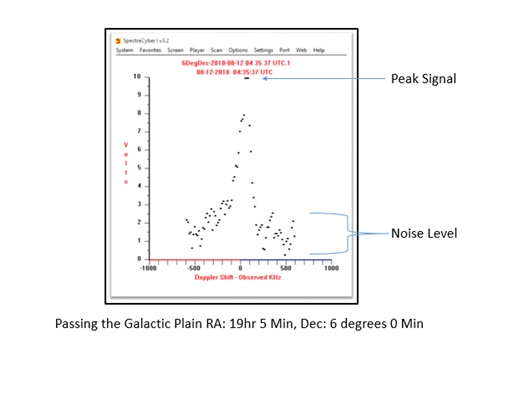 Follow-on observations will allow for measurement of the rotation rate of the Milky Way and Solar System!

Tony Bigbee used his RASDR4 on the 60-foot dish to observe this hydrogen absorption line at RA: 18.15hrs, Dec:-20 deg.

This target is a hydrogen source with a cloud of material between the source and Earth that absorbs the hydrogen energy resulting in a drop off of signal as shown below. 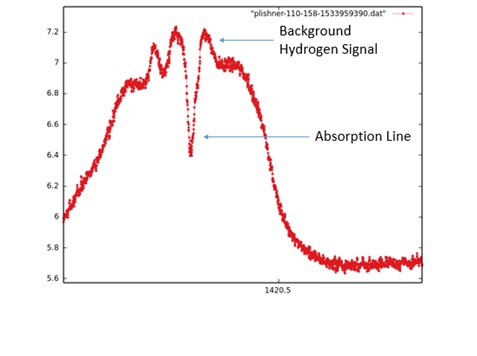 Bogdan Vacaliuc installed a RASDR2 onto the 60-foot dish and was able to observe the 1296 MHZ beacon at Ray Uberecken’s house, about 80 statute miles distance to the west-northwest. This observation helped verify the azimuth pointing accuracy of the 60-foot dish. 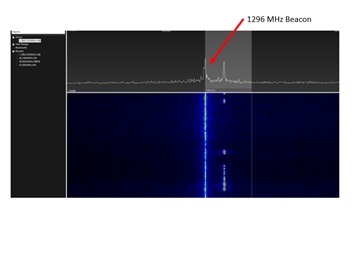 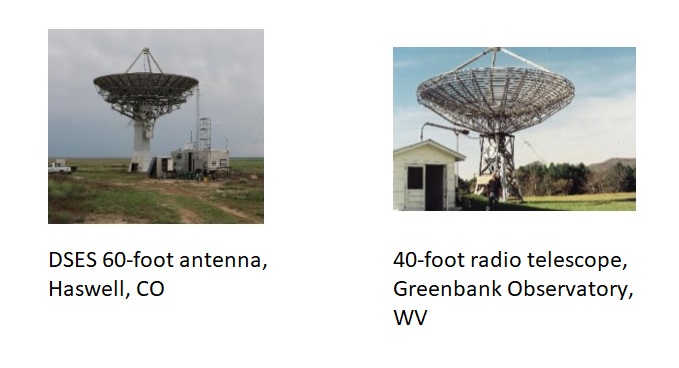 The following is a comparison of simultaneous observations made on August 15, 2018 of the astronomical radio source, NRAO 5690.

NRAO 5690 is a catalogued supernova remnant (SNR), with the celestial coordinate location of 18 hours 35 minutes Right Ascension and -7  degrees 20 minutes Declination. It is known to have an apparent radio brightness of 90 Janskies at 1.4 GHz *(1).

Each observation was made by Drift Scan. Drift scan is fixing the azimuth (left-right) direction of the antenna, and scanning the sky as the Earth rotates.  For each dish antenna, the elevation above the horizon is also fixed. As the Earth turns (at a quarter of a degree per minute), each antenna can detect radio source objects within its sensitivity, as the objects cross the beam width.

The observation at Haswell was done during a 42 hour drift scan at -7.6 degrees declination, in support of the joint SETI (Search for Extraterrestrial Intelligence) work between DSES and Skip Crilly *(2).  The dual plots show we are observing the same astronomical object at known pointing angles, and is a good verification of the two systems observing together.