Bill Miller and Gary Agranat represented the Deep Space Exploration Society at the 2019 Haswell Bazaar last Saturday, October 26th. The bazaar is held at the town’s community center, which is their former elementary school. At the bazaar are crafts, foods, and specialized products sold by local residents. Our antenna site is located just a few miles from the community center. The fair is also an opportunity for the local residents to socialize. And for us in DSES, it is a chance for us to socialize with them too.

Bill Miller created two new display panels for the event. These present an illustrated overview of our work and accomplishments to date. The panels are organized into four topics: infrastructure work, our radio astronomy science, ham radio, and outreach.

Gary brought a laptop which presented a running slide show of about 180 photos of our activities from the past year.

The bazaar concluded by 3 PM. The bazaar was a good opportunity for us to participate in the community activities, to show to the community what we do, and to continue to foster our good relationships with each other.

During the past year, the local railroad line that runs east-west through town had restoration work begun. The line had been abandoned several decades ago. We learned that the original Haswell railroad depot building is still in town. We were told where it is, and we went to look. We were told that if passenger rail service was restored, there was interest to restore this depot, and bring it back to the rail line and utilize it again. It is the only surviving railroad depot building from the original Missouri Pacific Railroad.

After the bazaar was finished, we stopped at our Plishner antenna site. There we looked at the progress of the ham radio tower. And Gary retrieved the ham radio log data from the most recent contacts. Steve Plock made our first contacts with the Yagi antenna on the new tower last Friday. He contacted AG5Z in Mississippi on the 20 meter band, and 9Y4D in Trinidad on the 15 meter band.

For more information, please contact us at our email address: information (a)dses(dot)science or destm(a)gmail(dot)com.

Please read our Review of our annual Open House at the Plishner Radio Telescope site in Haswell, in August 2018.  We host our Open House each year during the Perseid Meteor Shower. The link will open our review report as a PDF file.  It was an enjoyable weekend, with many science and social activities.  A significant highlight is our ability to now make observations with the 60-foot antenna. With many photos. 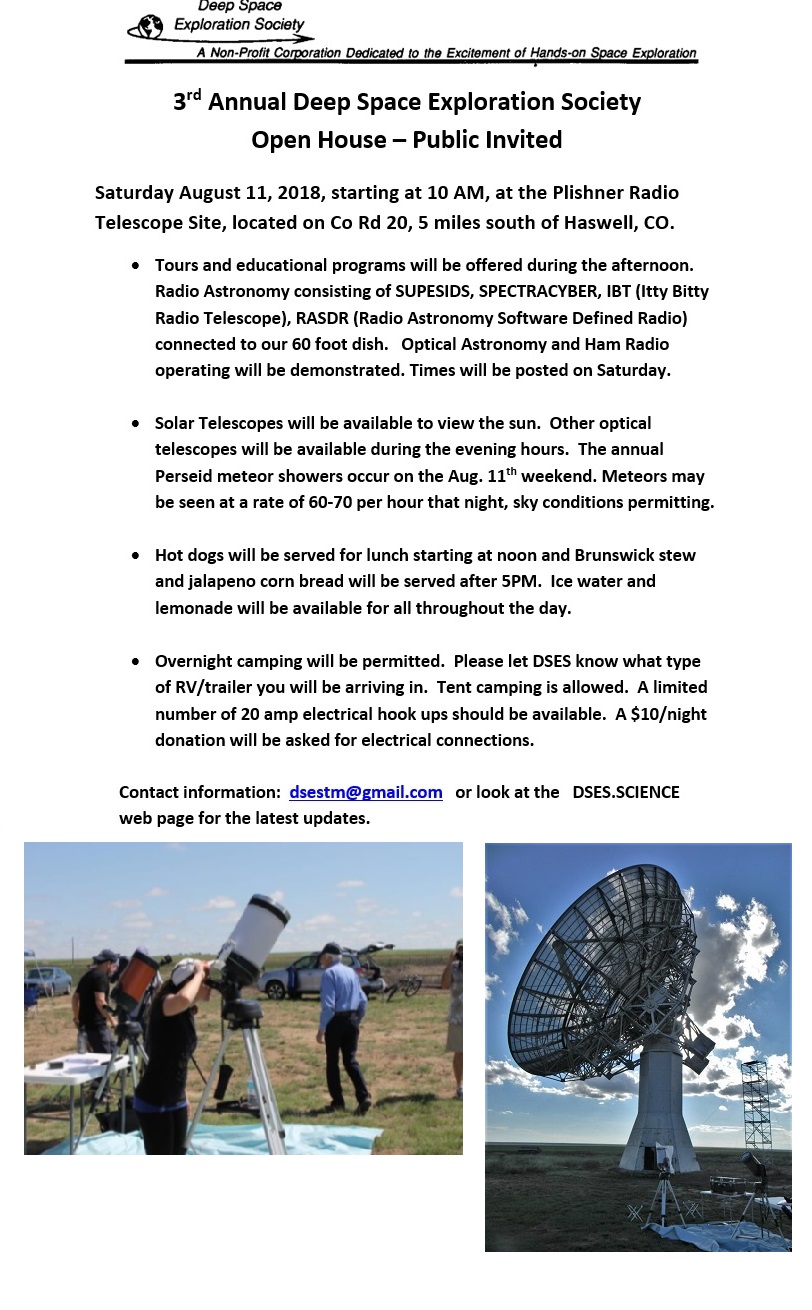 This is a look back at our Second Annual Astronomy Open House at our Plishner radio telescope site, written by club Secretary Bill Miller. Includes many photos, in pdf format. 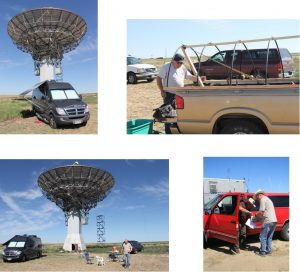 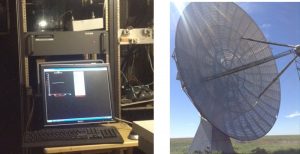 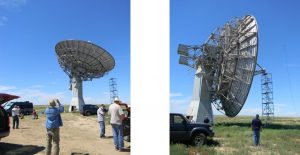 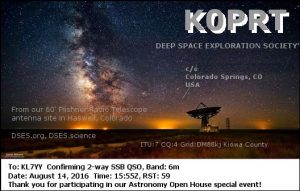 I set up our eQSL account and created an eQSL card for us. I then uploaded our log file from our weekend QSOs. I attached an example of our eQSL that goes out to our contacts. (In this case it is to Myron, who gave me a call from his radio.) We had 86 QSOs. 9 eQSLs from the weekend were already waiting for us in the eQSL inbox.

I will attempt to set up an ARRL Logbook of the World account for us this week. And when I have a chance I will provide an update to Steve for the QRZ page, now that our weekend activity completed.

Also when I get a chance, I’ll email my photos from the weekend to Bill.

DSES will conduct its first open house this weekend, Friday, August 12 and Saturday August 13, starting at 5 PM on Friday. The Perseids Meteor Shower event should be at its peak this weekend (after midnight) with an estimated 200 to 300 meteor’s per hour.

We should have several optical telescopes on site for viewing of the skies. We will have radio equipment on site for all our working science projects. A ham radio station using the new DSES club call sign K0PRT (Plishner Radio Telescope), will be on the air on several High Frequency radio bands. We also hope to have an amateur radio Oscar satellite station working as well. Our big project for this weekend will focus on installing the new tri-band dish feed. If all goes well with this installation we hope to bounce a 1.2 Ghz radio signal off the moon and be able to hear our echo 3 seconds later.

For those who may want to spend the night, please bring your own sleeping needs. We should have floor space in the bunker for your cot/bed. WE DO NOT recommend sleeping on the floor in the bunker at this time. We have lots of parking space for RV’s, trailers, or trucks/cars. We will start grilling hot dogs around 6PM Friday. Be prepared for hot temps during the day and thunderstorms, rain, wind and maybe hail during late afternoon or evening. Mud boots may be nice to have if it rains.

Call me if you need directions or further information on this weekend’s events. Hope to see you there!!

A group of 12 visitors from the Hammn’ Sams RV club visited the site Saturday afternoon. This group, all amateur radio operators, traveled 35 miles north from their weekend campout at the John Martin Reservoir camp ground on the Arkansas River to make this visit. Myron and Bob Sayers, members of this RV group, made this invitation. Dr. Richard Russel provided an impromptu briefing to the visitors and, without going up into the dish, Steve Plock helped 3 members view the dish pedestal.

We have begun our 2020 DSES Annual Membership Drive. You may now pay your membership dues for 2020.

[SECOND UPDATE November 27, 2019] Dr. Richard Russel recently attended the Very Large Array (VLA) Imaging course in Socorro, New Mexico. This course taught how to take the data sets from the VLA archive and produce images. Dr. Russel produced this pdf presentation to show us how the results look, and to show us the capability. This update includes the effects of the antenna configurations, and more examples of data reduced images. Also in this post, he presents his first results of hydrogen HI drift scan measurements from his new 9-foot antenna dish at his home.: Very Large Array (VLA) Imaging Results – 2nd Update & HI Drift Scan using 9-ft Dish at Russel Observatory September 2019.

60-foot dish antenna:
[August 19, 2018] The 60 foot dish antenna is now periodically being used for joint observing runs for SETI with Skip Crilly at the Greenbank Observatory in West Virginia. These joint observations are discussed in Skip's presentation slides from the 2018 SARA Western Conference at Stanford. See the slides on our Publications Page, in the Science Section.

With the pointing systems and receivers now being validated, we also are starting to use the 60-foot dish antenna for detecting astronomical radio source objects and the Milky Way at 1.4 GHz. We currently are using a SpectraCyber 1420 MHz Hydrogen Line Spectrometer. And we are starting to try RASDR4 (Radio Astronomy Software Defined Radio). A 1.4 GHz feed designed by Steve Plock is at the focus.