This meeting’s notes on PDF

Bill made Parchment Award Certificates and Myron wrote award checks for our winners. The monetary awards were taken from money generously donated for the purpose by Rich Russell from proceeds of his “Mind Files” project.

If anyone wants to see the projects, Bill has a list and files

In 2019 and 2020 we accomplished a lot of the big goals that we had been working on for a number of years including (H1) Hydrogen Line mapping, Tropospheric scatter communications, Pulsar detection, and EME.  Now that we have those accomplishments and can replicate them at will, we should look ahead and decide what we do next.  Everyone should think of a radio astronomy or organization project that they think would be doable and important and get those into a list that we can review and go after with some more detailed plans.   The main categories  of interest would be:

In 2019 and 2020 we accomplished a lot of the big goals that we had been working on for a number of years including (H1) Hydrogen Line mapping, Tropospheric scatter communications, Pulsar detection, and EME.  Now that we have those and can replicate them at will, we have to ask ourselves, what else can we do and what direction(s) should we go in? In my opinion here are several key areas or categories that the org. needs to address with some more detailed plans.

2. Instrument and electronics upgrades and additions

4. Educational programs and events for members and students

Please send us a list of your special award judges and their email contact information by February 10, 2021.

We will send you and your judges an email with the details and code to view projects in the virtual showcase.

The attached letter outlines the information for this year’s fair.

We are looking forward to your participation in the virtual science fair and are hoping that next year will be an in-person event.

We had 16 participants in the virtual science meeting today:  Thanks everyone for joining.

This 8-day regional event, designed to ignite wonder and inspire curiosity about the world around us, attracts between 10,000 and 20,000 attendees each year. For more information about the Cool Science Festival go to:

On Saturday September 12, 2020 an observing team of Rich Russel, Bob Haggart, Bill Miller, and Gary Agranat spent the day observing pulsars. This is the first observing session since we recalibrated the 60-foot antenna azimuth pointing the weekend before. The team observed 3 pulsars we had not seen before. Plus several other pulsars were attempted. The team spent the whole day at the site, from about 9 AM to 7 PM.

The pulsar signals are so faint that we cannot detect them directly. To observe them, we have to point to the correct celestial coordinates and then track that point as the Earth rotates. While we are pointed, our computer accumulates the signal data. We need at least a half hour continuously tracking the position. At this session some of our observing runs lasted 2 hours, for the fainter objects. At previous sessions we have tracked for as long as 4 hours.

After the observing track, we have our software process the data. The random background noise should cancel itself out. But the pulse signals should build up with time. If we have the correct timing interval of the pulses, and if everything else is working, the computer display will show the pulses, and several other parameters.

Pulsars are very unusual objects. These are what remain of massive stars (greater than 5 solar masses) after they use up all their fuel for nuclear burning. These more massive stars fuse heavier and heavier elements at their cores until they start to fuse iron from silicon. Unlike the fusion of other elements, iron requires energy to fuse, rather than produce energy. The sudden reduction of energy at the core drops the temperature and pressure there. The pressure at the core is no longer enough to counter the weight of the star’s material above it. Gravity is now the stronger force, and the material above collapses in on the center. The pressure and temperature at the core then becomes even higher, which starts new reactions that fuse the matter at the center to neutrons, and and which also generates neutrinos. The outer layers falling in at great speed bounces back out. The result is a supernova explosion. What remains is the neutron star at the center. It is extremely massive and compact. And like an ice skater rotating faster as the arms are brought in, the star’s rotation speeds up immensely. The star’s magnetic field also has become compressed and much more intense. Charged particles will rotate around the magnetic field lines, with very high energy. Whenever charged particles are forced to deviate their paths from a straight line they emit electromagnetic energy, like visible light and radio. At the neutron star’s poles, this energy is channeled out, with immense energy. Because the magnetic poles are generally not at the same spots as the rotational poles, the beam of this light and radio is spun around like a light house. If Earth happens to be in the path of such a beam, we detect that as a pulsar. So that’s what we’re observing.  These neutron stars are hundreds and thousands of light years away.

Pulsars were first discovered by accident in 1967, by Jocelyn Bell (now Jocelyn Bell Burnell) who was then a graduate student at Cambridge University. Bob contributed a recent photograph of her, posed by some radio telescopes. We now proudly have that displayed on the wall above our computer displays.

Because the observing runs take a while, for this session we decided to try watching some videos. Bob brought a DVD player and a large monitor. Gary brought some educational videos, including one about the Crab Nebula and pulsars. Rich brought some movies.

On this work trip the team also inspected damage to our ham radio antennas, damage probably from the storm weather over the past months. 7 radials at the base of the vertical antenna were damaged. And the 3 element Yagi antenna on tower was slightly tilted along its longitudinal boom.

Tumbleweeds also had accumulated again at the bunker ramp. Some of the surrounding fence had also been damaged from the weather. Rich Russel brought some fencing to use in the future, to place over the immediate entrance path to the bunker door.

Repair of the ham antennas and ramp clearing will be planned for a future work trip.

Below is a photo narrative of the day’s work.

It was an excellent day’s work. 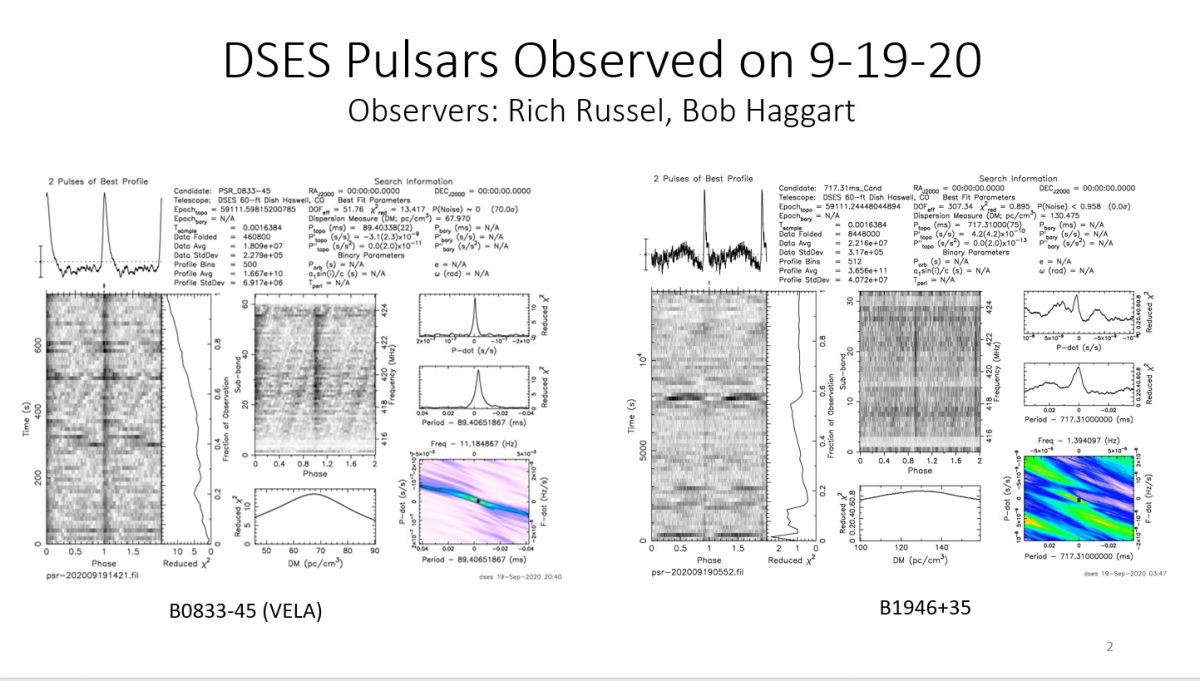 Bob Haggart and Rich Russel did an observation all nighter on Friday/Saturday (September 19, 2020, GMT) and observed 2 pulsars.
VELA (B0833-45) is one of the strongest pulsars at 5 JY while B1946+35 is at 0.145 JY.
DSES is one of the most northern amateur stations to detect VELA. We detected it in 15 minutes at 5 to 6 degrees elevation.
This make 13 pulsars and puts us 5th on the international amateur pulsar hunter list. http://www.neutronstar.joataman.net/

The DSES team of Rich Russel, Ray Uberecken, and Glenn Davis observed for pulsars on Saturday September 5, 2020 at the DSES 60-foot dish antenna at Haswell, CO.

The team successfully observed 5 pulsars which we hadn’t been able to detect before.

The success is attributed to the calibration of the antenna pointing system and the new automatic tracking system developed by the System 1 team.

We started with calibrating the azimuth of the antenna (it was 2.5 degrees off!) Elevation was good. Glenn put the offset in the auto tracking system and we were able to detect the B0329+54 pulsar within 30 minutes. (We use the B0329+54 pulsar, the first one we successfully saw last May, as a starting reference. If we can observe this, we know our system is working.) Every pulsar we looked at after that was detected – we just ran out of time for more!

It is possible we missed observing previous pulsars because our pointing accuracy was off.

See the slide set for our observation summary.

We are pretty sure we observed the Crab pulsar. The last slide shows an analysis of the time between pulses we measured for the Crab pulsar, compared to the standard reference database.

More detail to come at the next science meeting

Our total pulsar count is now 8!

These are the slides from our online Science meeting, on August 24, 2020. The meeting was hosted by our DSES Science Lead, Rich Russel,

You can watch the video of our meeting:

Tracking stayed within the bore site during the whole 5 hr. evening session.

Need to do more training, Glenn and his wife will go to the site tomorrow and draw up a training presentation and checklist.

5. Rich gave high praise and kudos to the System 1 team to get a very high quality tracking and control complete. Very clean system design and implementation from Glenn Davis, Lewis Putnam and Phil Gage.  Much praise.

Discussion/presentation on Pulsar and other science topics from Dr. Richard Russel