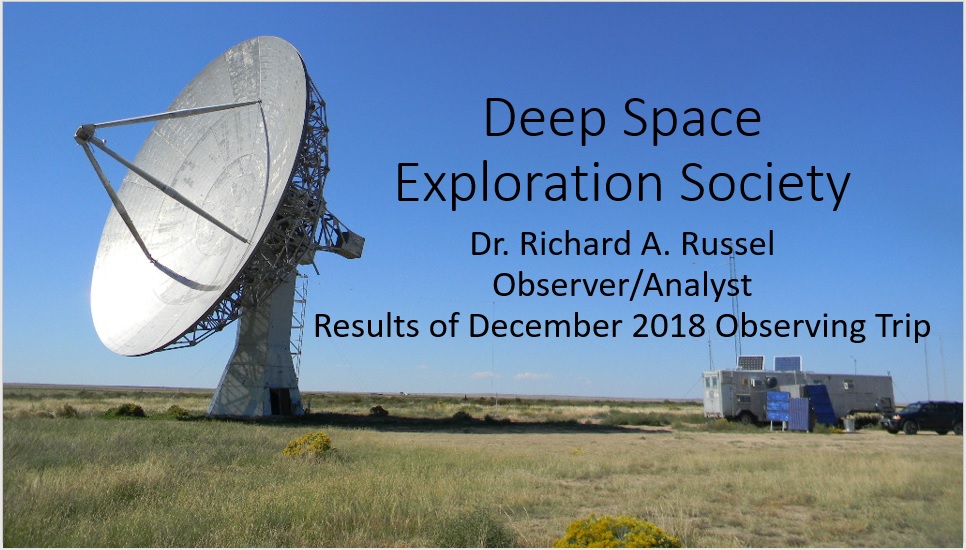 Dr. Richard Russel put together this slide set about the latest results from this month’s observing.  Contents:

Personnel present – Bill Miller, Ed Johnson, Steve Plock, Ed Corn, Myron Babcock, Bob Haggard, Glenn Davis, Phil Gage, Hans Gaensbauer, Rich Russel.
Rich Russel and Bob Haggard showed up Friday, joined later that day by Hans Gaensbauer. All three spent the night and Rich did radio astronomy observations. Bob  Haggard finished the new front stairs for the communications trailer. Thanks Bob they look great! Everyone else came the next day. Glenn Davis and Phil Gage upgraded the software on pointing System 1, and Glenn installed the NTP server as well. Bill Miller and Ed Johnson were able to demonstrate go-to functionality on System 2 and the PID algorithm employed operated flawlessly. A milestone has been achieved and Ed plans to attempt sidereal tracking as his next step. Congratulations to all members of both pointing teams!
The fireproof door for the bunker hallway was cut to size by Steve Plock, Myron Babcock and Hans Gaensbauer. Ed Corn continued with electrical buildout in the bunker.
Again many thanks to all who participated and worked in the spirit of friendship and cooperation.
submitted by: Steve Plock, President DSES