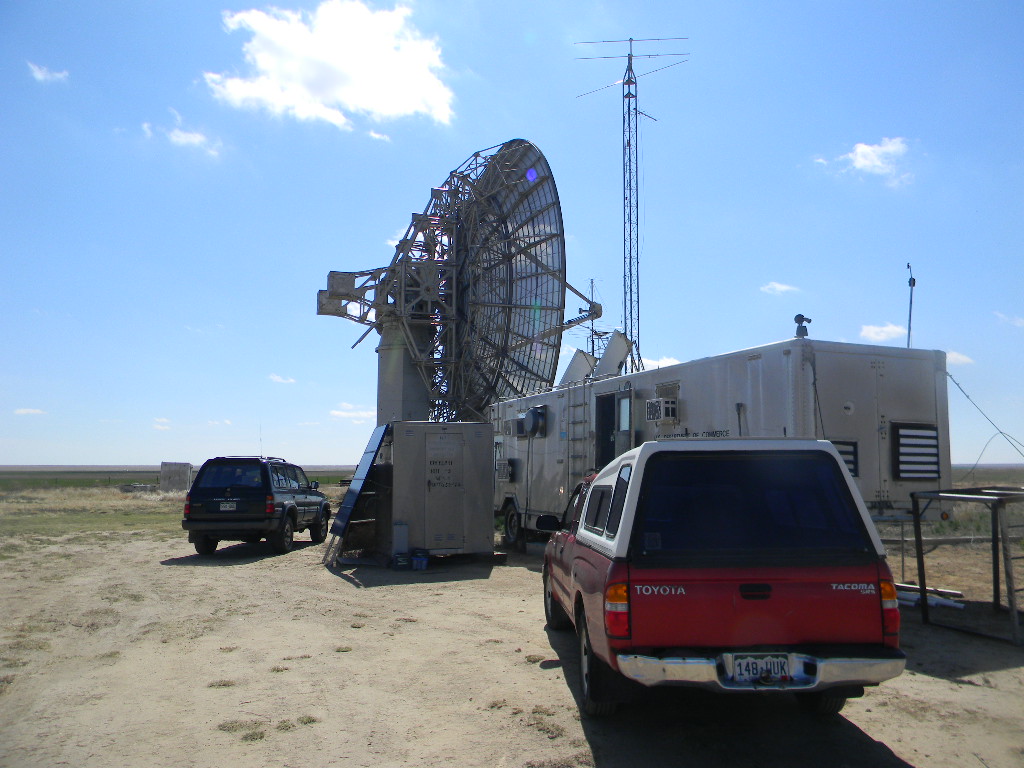 The following is the report of our work trip to the Plishner antenna site in Haswell, Colorado on Sunday April 22, 2018.  This was written by Ed Corn KC0TBE, with additional contribution by Dave Molter AD0QD, and with editing and photos by Gary Agranat WA2JQZ.

Steve Plock (KL7IZW), Ed Corn, and Gary Agranat left the Ellicott Fire Station about 7:30 AM, and arrived around 9:30.  Dave arrived just a bit later. We met Paul Berge (K0DJV) at the site, who had traveled down on Saturday from Lyons and stayed overnight. Paul had done some clean-up in the bunker. And he cleaned out the pile-up of tumble weeds from the bunker ramp.

Steve worked on the locking system for the box with the azimuth/elevation hardware in the pedestal. He reports moving the dish antenna down to 0° elevation and back up to zenith with no read-out errors. The lock holds the door securely shut to form a good shield from motor EMI (interference).

Ed built a more robust gate for the bunker ramp. The strong winds at the site had unhooked the previous gate, which then allowed tumbleweeds to pile down the ramp again. Ed dragged two farm gates from west of the Communications Trailer to the bunker ramp. He set up the hinge pins for the gate, and Gary helped hang the gate. 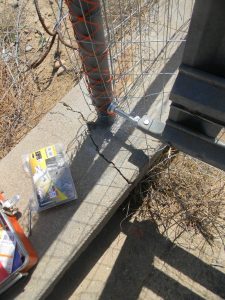 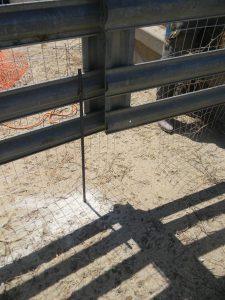 We then covered the gates with field wire (in the gaps and along the bottom) to keep the tumble weeds from getting into the ramp area.

Ed then installed a VHF base antenna on the bunker dog house for the talk-in radio. The talk-in radio, K0PRT 146.460 MHz, is now up and working, with desk remote controls in the bunker and communications trailer.  Please note the desk remote control in the comm. trailer must be plugged into an outlet and powered on to operate. This arrangement keeps the RF at the bunker, and gives access to talk-in radio at the comm. trailer as well, without RF emissions near the 60-foot dish. 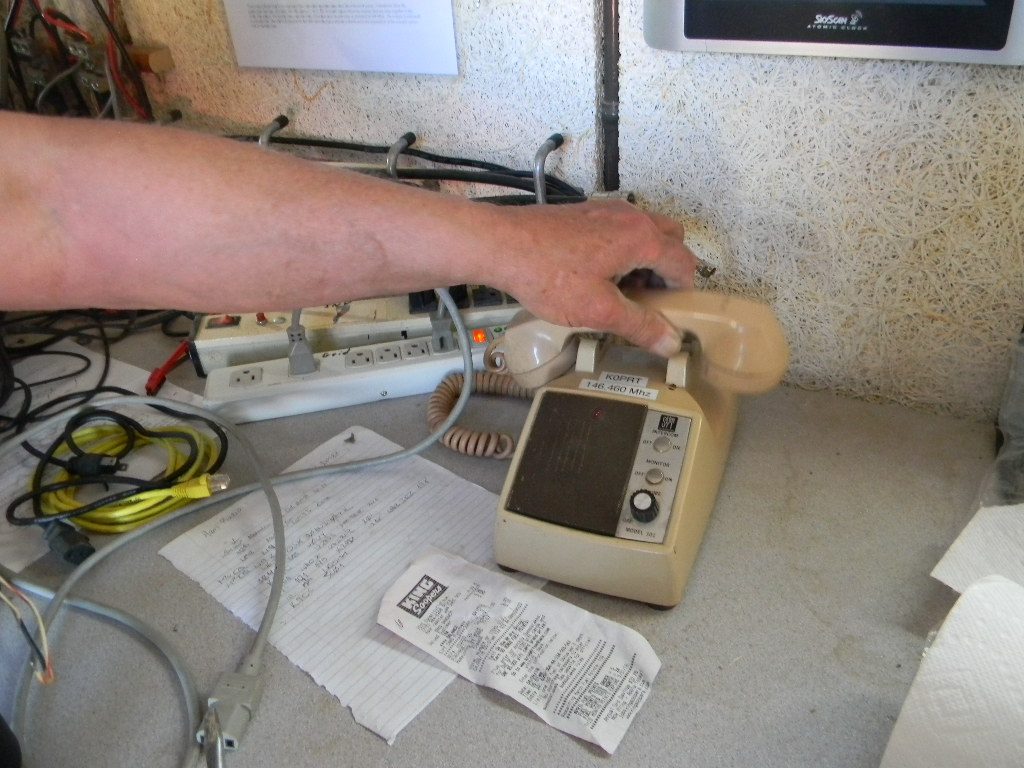 Gary continued work on the Hustler 5-BTV HF vertical antenna for the club station at the bunker. By the end of the day Gary had the vertical assembled and mounted on an anchor pole he installed with Dave’s help. The vertical is in place with non metallic guys for stability in the Plishner winds.

Gary added these comments: “I assembled the antenna with lengths used by the previous owner, but noted the originally specified lengths from the manual. Some worn parts were replaced with parts provided by Dave, and some machine screws were replaced with stainless steel ones. We salvaged a conduit pipe for a base mount, and Dave drove it into the ground (a few feet deep) northwest of the dog house, at a distance of more than 20 feet from nearest obstacles. Dave and I then mounted the antenna on the base…”

“… One of the two leads of the pigtail connection to the antenna at the base came loose. With Steve’s help we removed the pigtail, and I soldered a new lug connector, and reconnected the pigtail.  I then used Dave’s antenna analyzer to map the SWR – frequency response of the antenna.  That was just an initial check, as we have not yet installed the radials. With the current lengths, the antenna is resonant in the 80 and 40 meter bands, but not the 20, 15, and 10 meter bands. At the end of the day, the whole team present helped install non-conducting guy ropes. Those will provide the lateral structural support against the expected winds.”

Dave unloaded a truck full of concrete blocks,  bagged cement, and mortar mix for use in the retainer wall extension at the bunker.  Then Dave and Paul used the rest of the day to work on the antenna dish controls. They also lowered the 2 old drive motors from the pedestal control deck to the floor in preparation for removal from the site to salvage.

Dave added these comments: “I delivered 22 concrete blocks, 2 bags of type S mortar mix, and 6 bags of concrete mix. That makes a total of about 65 blocks to use when we resume the wall building. Paul Berge was at the site, and we discussed the installation of the VFD for the elevation axis drive. His insight answered many questions I had and had never gotten answers to. We stepped through the wiring of the VFD and cabinet wiring, and how the remote unit in the trailer and hand paddle were wired to the cabinet. We soldered permanent ground wires with terminal lugs onto the shields of the Az and El brake cables, and onto the shield to the elevation motor drive. All shields were terminated to the main cabinet ground connection. There appeared to be no change in the observed noise present on the LEDs while no signal was present.”

“Paul and I lowered the two motors that were on the 03 (top) level of the pedestal to the ground level. There is one more motor on the 02 level that Paul believes is a spare for the installed motor.”

“A mounting post was driven in the ground about 35 feet west of the main support for the for 80 meter dipole. Gary had assembled the 5 BTV vertical antenna, and the group mounted the antenna to the post, and installed 3 guy lines.” 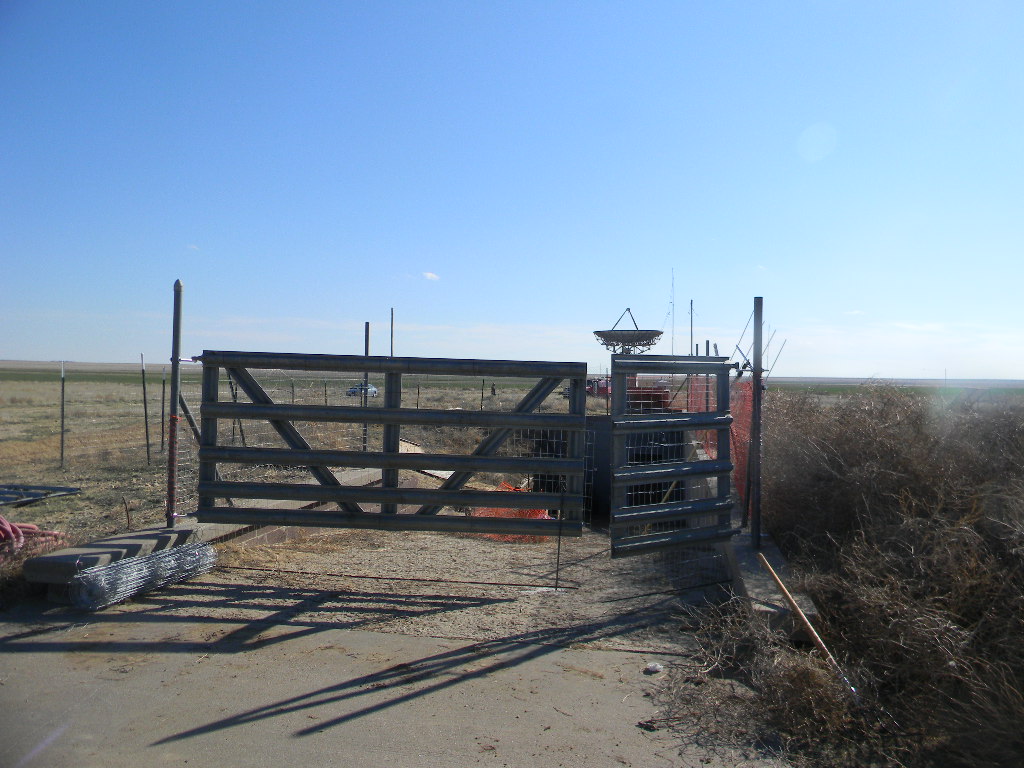 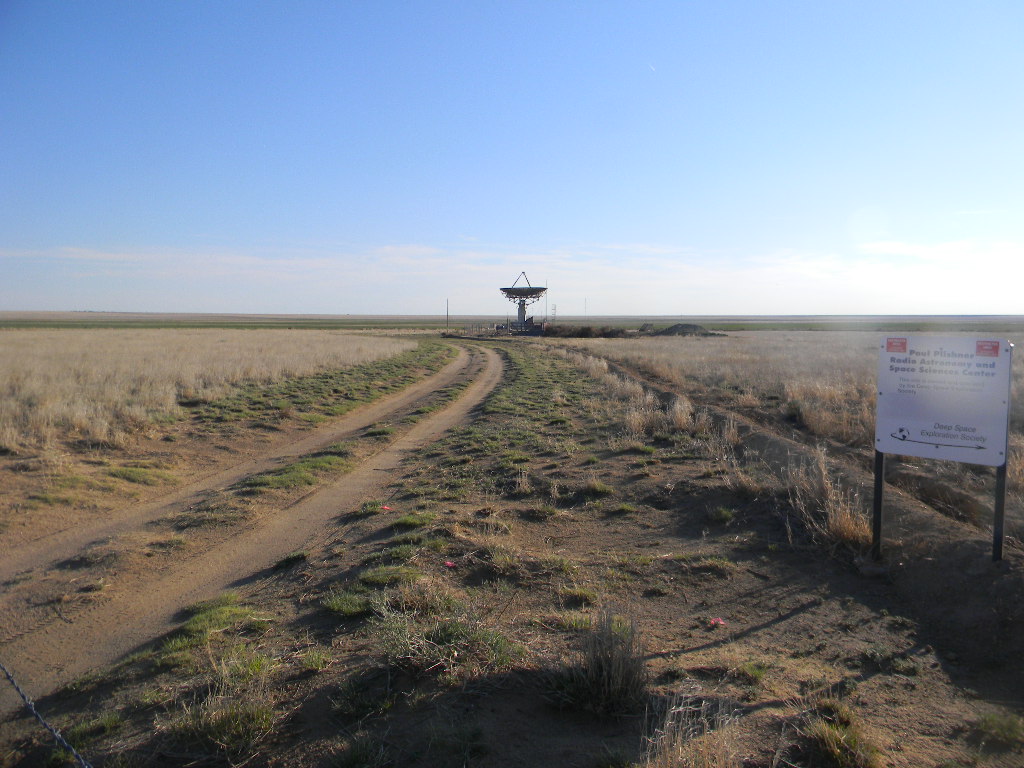 Paul stayed over Sunday and Monday nights, traveling home on Tuesday. He spent Monday doing routine maintenance and clean-up on the dish drive systems, which had been delayed and was past due.

Thanks to everyone for a very productive work weekend at the site.