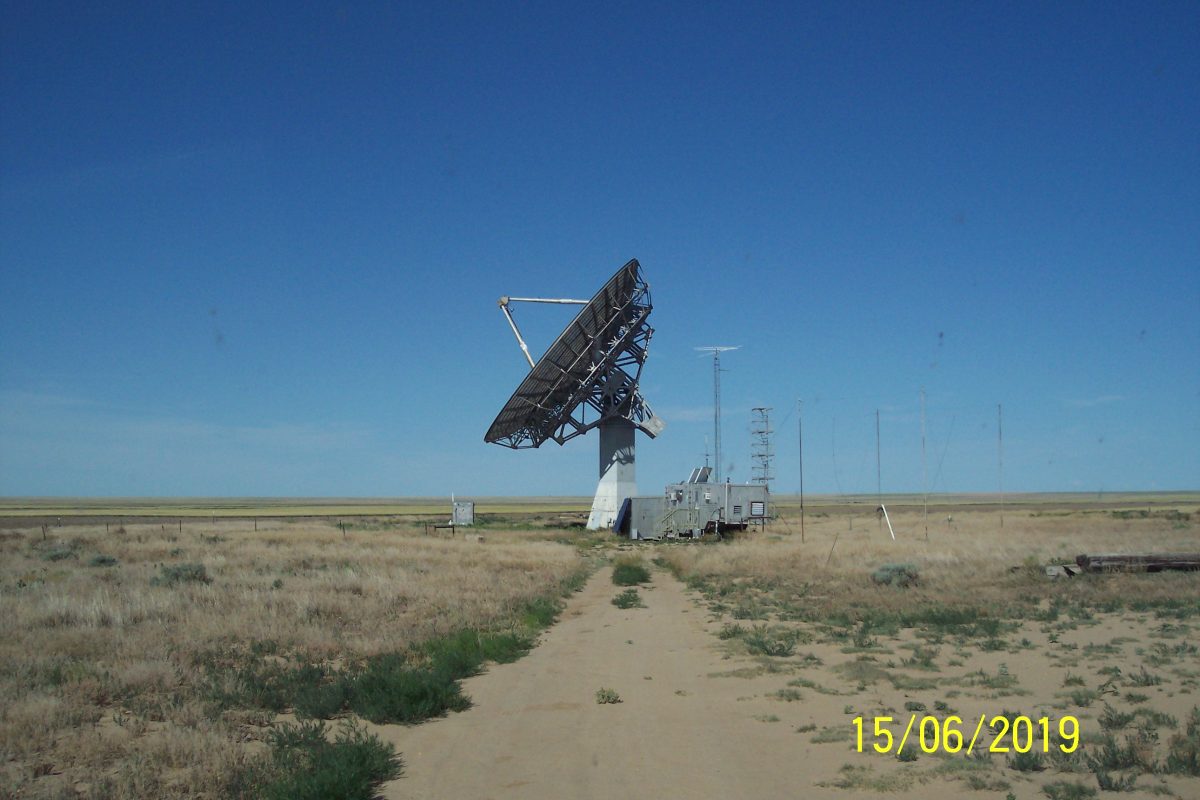 Accuracy: This is only a summary of my work on Friday and Bob Haggart trip from his report for Saturday and you should add your own and correct anything I missed. WKM.

Bill Miller’s Work Trip Report, Friday, June 14th
Bill was the first to arrive at the site about 10:15 on Friday 6/14 and started by opening the trailer and removing the exhaust fan cover. He lubricated and reattaching the fan wires, started the air conditioners, swept the Comm. trailer floor and removed the mud left from the last visit.
Steve came in shortly after and he and Bill went to the top of the tower to inspect the Liquid-tight conduit that Steve had previously installed for the elevation position synchro wiring.

Jonathon Ayers came in and assisted Bill to hook up the wiring to the synchros on the elevation axis in the top deck.

Bill then got some assistance from Floyd Glick while hooking up the wiring in the control deck of the dish pedestal. Thank you to Jonathon and Floyd.
The goal was to attach the Elevation position synchro encoders to the synchro panel in the Comm. trailer. This would match to connections of the Azimuth synchros previously installed. It would complete the synchro dish position indicator system which is an accurate minimal tech backup dish positioning system that needs no computer.

Bill was under a tight schedule as Rich had a pulsar observation planned to start at 3:30. Bill tested the system and it worked initially but then started tripping the ground fault interrupter on the synchro panel within a few minutes indicating that the insulation or electrical clearance of the elevation connections was breaking down somewhere in the path. Because this circuit is 120VAC, the ground fault interrupter is critical to safe the system with the many intermediate connections and it did its job. (Caution) Bill unplugged the synchro panel from AC and it should be left unplugged until we have a chance to trace down the fault in the elevation wiring. It is most likely in the old terminal box in the control deck, moisture in the system or hasty wiring in the elevation axis Encoder box. I also believe that the synchros in the elevation axis box are either bad or incompatible and should be changed out and matched to those in the trailer synchro panel. Ed Johnson has a box of synchros from the bunker.

Bill had to leave about 4:00PM while Rich, Floyd and Steve stayed to make their Pulsar observation. This seemed to be going well but the large storm was brewing in the area and I suspect they had to abandon the site that evening.

From Bob Haggard’s Work Trip Report. Saturday, June 15th
Arrived at the DSES site 8:35am. Opened gate, opened the bunker to retrieve keys. Noticed the dish was setting at about 45 degrees. Opened the Ops trailer and the battery box for 110V AC power. Mounted the solar powered, dusk to dawn, LED porch light. Removed the camera and the broken rear trailer window. Installed the clear window and camera right side up. (there you go Rich) The molding to hold the window in was rotten, have to make 4 new ones. The putty was too old to be used, will need more on next trip.

Removed two folding chairs from battery box and stored them in the OPs trailer under the table next to the filing cabinet. Stored the donated table saw and stand in the battery box. Picked up all unused unwanted lumber (there you go Steve)

Secured the battery box and the Ops trailer. Returned the keys to the desk and secured the bunker and gate. Secured the main gate and departed at 2:45.

No one else showed up for this work day.

The weather was perfect, a mild breeze, just enough to keep you cool while working in the hot sun.