The meteor leaves an ionized trail of material in the atmosphere that is highly reflective to a radio signal. An available ground based radio signal is the analog video television channel signal at 55.25 MHZ. The U.S. no longer broadcasts this frequency since the country went to digital television. However, it appears that there are a few signals being broadcast from Canada and Mexico.

Skypipe will also allow the operator to count the number of meteors during a period of time. The below chart shows the results from last years Leonid meteor shower. 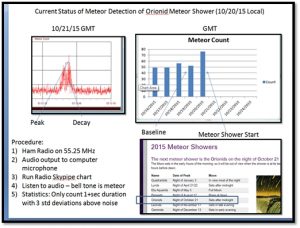