On Sunday March 9, 2019 a group of Deep Space Exploration Society members in Colorado Springs salvaged a 2 meter diameter satellite dish antenna, to repurpose it for solar radio astronomy. The antenna came from the KCME commercial broadcast station, which was no longer using it. The group moved the antenna to the home of DSES member Floyd Glick. Floyd will configure and test it there, to use for solar radio astronomy. It will then eventually be moved to the group’s Plishner antenna site in Kiowa County.

Here are some photos from the move, taken by Bob Haggard, and one photo by Gary Agranat.

Deep Space Exploration Society members Bill Miller, Gary Agranat, and Tony Bigbee participated as judges at the 2019 Pikes Peak Regional Science Fair. The Fair was held at the University of Colorado at Colorado Springs University Center building on Saturday February 23rd.  This year 115 students from 20 schools presented projects. The purpose of the fair is to encourage students to take more active interest in the study of science and mathematics, to encourage experiment and consideration of science careers, and to provide a means of reward and recognition.  Informally the fair gives students an opportunity to interact with and get helpful feedback from specialists already in the fields.

Bill and Gary were at the science fair to judge and award prizes specifically offered by DSES. The prizes were offered to encourage projects related to astronomy and radio.  However any outstanding STEM project related closely enough to the fields were considered.  Bill and Gary interviewed 17 students in 16 projects at the fair, at the middle school and high school levels, with most of the topics in physical sciences or engineering. A scoring criteria was used based on the qualities of the ideas, hypotheses, methods, data, and lessons learned.

For outstanding senior division project we gave a certificate and $100 to Mark Bloomfield. Mark received 6 additional special awards from other organizations, and he placed 3rd in the Fair’s Senior Physical Sciences category.

For the two Junior Division prizes we gave a certificate and $50 each to Hailey Kressen and Benjamin Homan.

Tony participated as a general Award Judge for the Fair itself. He judged  middle school social and behavioral science projects.

Tony took a few minutes to take some photos.  The first three photos are from when Bill and Gary interviewed Connor Takenaka about his cybersecurity project. The third includes Tony. 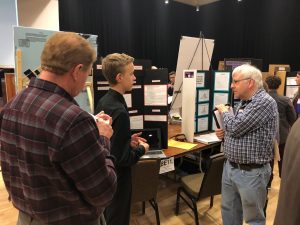 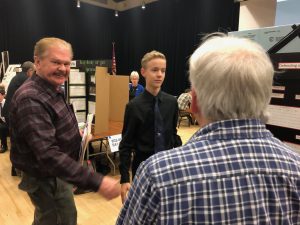 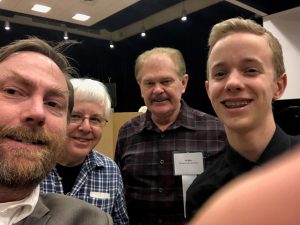 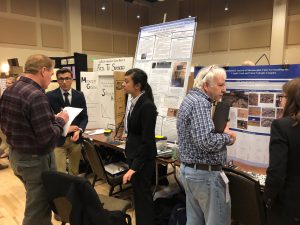 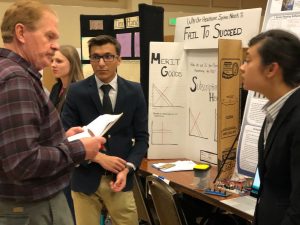