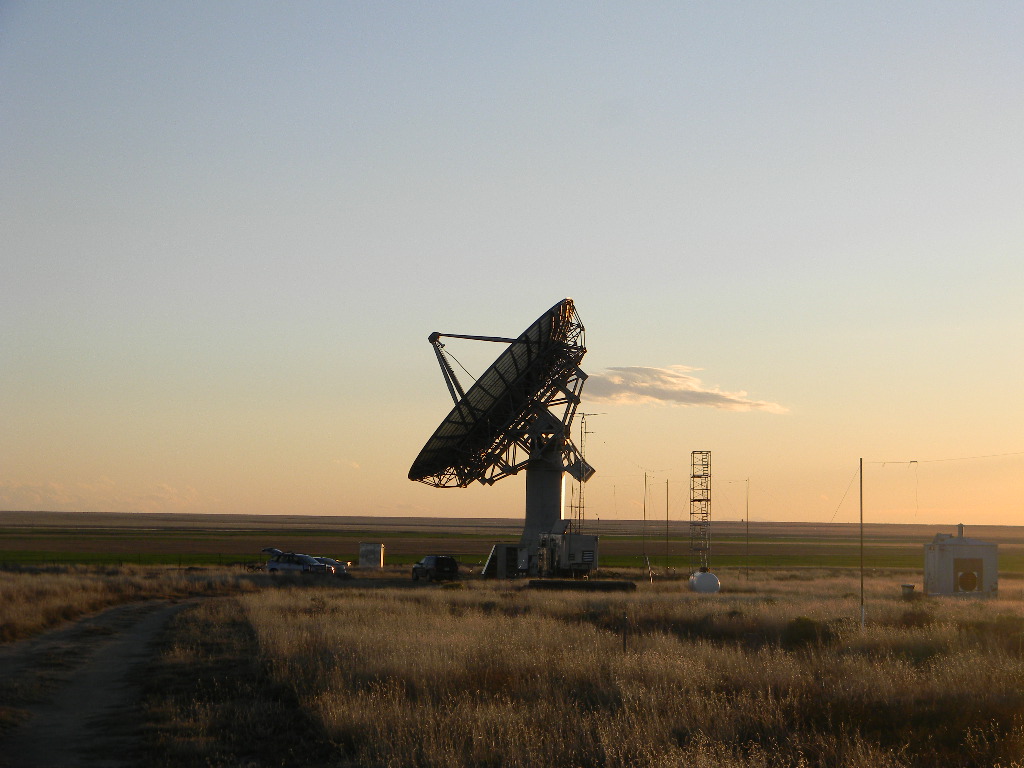 The antenna was set with an azimuth of 149.6° , and with an elevation 39.2° above the horizon.  This allows the antenna to drift scan the sky along an arc, as the Earth rotates, at Declination -7.5° (celestial latitude).

This scan was designed to pass across the triple star system 40 Eridani, at about 0200 local time. This was a joint SETI project with Skip Crilly to make simultaneous measurements together with the Green Bank Observatory 40 foot radio telescope in West Virginia. The two sites are at about the same latitude, at a distance of about 1300 miles.  Joint observations were scheduled for the early mornings of October 26, and October 29.

The specific target of interest was 40 Eridani A, which is at a distance of 16.4 light years.  Eridani A has a habitable zone around it for an orbit calculated to take 223.   The frequency spectrum of 1405 to 1445 MHz is continually sampled, in order to look for “triplets” signals.  Simultaneous observing from two distant sites would rule out that any signals detected at both sites cannot be from local terrestrial sources.

Also on this trip, Gary Agranat WA2JQZ operated the ham station from the bunker, to participate in the annual Boy Scouts of America Jamboree On The Air (JOTA). Ops were on 20 meters, using the bunker’s 160 meter dipole. Two JOTA stations were contacted in California, W1AW/6 and N6B.  Other JOTA stations around the US and also Mexico were heard, but conversations among them were already well in progress, and so we didn’t interfere with those. Attempts were made to listen for the JOTA station in Colorado Springs, operated by Dave Molter AD0QD, but it was not heard.  In between JOTA ops, the club also participated in the New York State QSO Party, on CW and SSB, with 19 contacts.  And 9 contacts were made with JT65.  The longest distance JT65 contact was to Spain EC2ATM, and with SSB to 9A3XV in Croatia.

Skip Crilly used his antenna analyzer to check both the 160 and 80 meter dipoles located at the bunker.  He verified that most of the lower part of the 20 meter band was usable, and the 17 meter band was as well, but many of the other ham bands were not with the current length of the antenna.  Ed Corn KC0TBE later also used his antenna analyzer to check the antennas and feeds.  And he checked the amplifier.

Ed Corn also placed the two sump pumps on separate power inverter feeds.  That ensured that each pump can start independently if both are needed simultaneously.

Paul Berge, who was active several years ago, drove to the site from the Denver area. He discussed past and current projects with the team. Paul Berge, Steve Plock, and Skip Crilly stayed at Haswell overnight, to continue work the next day. Overnight the sky was clear, with the Milky Way clearly visible. The Orionid Meteor Shower was in progress, and several other members of the team stayed past sunset to watch the night sky as well.

Also working at the site on this trip were Rich Russel ACoUB and Ed Schade KC0HCR.