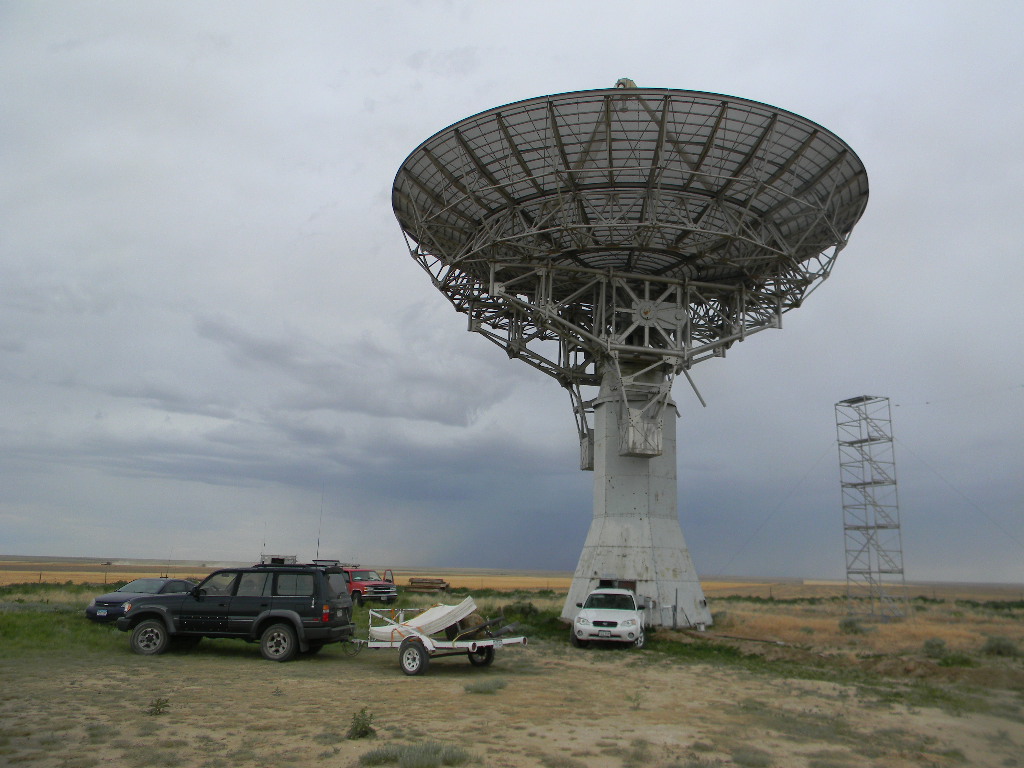 Trip report by Bill Miller, with editing and photos by Gary Agranat.

This is a report of our work at the Plishner radio telescope antenna site during the weekend of June 16 & 17, 2018.

Vertical Multi-band Antenna Radials: Gary performed a set of SWR (Standing Wave Ratio) measurements with an antenna analyzer on the vertical multi-band antenna, which was installed last April for the ham radio station at the bunker. He then installed 17 radials at the antenna base.  On the next trip he plans to retake antenna analyzer measurements, and also do some digital radio operating, to compare characteristics before the radials were installed.

New Rest Room:  Steve Plock and Ed Corn continued work on the new rest room/out house.  This is a refit of one of the rail road buildings previously used for storage.  They added tie down cables to prevent it from succumbing to the winds.  It will be fit with a chemical toilet and there is a waste receptacle behind the building for easy dumping access.  This will greatly improve our facility for public visits such as the open house on August 11th.

Synchro Installation: Bill worked on the dish Az/El Synchro installation as a simple backup pointing system for the dish. On the previous trip Bill and Steve installed an additional 2” conduit from the Comm Trailer to the pedestal.  Myron had helped pull in the 15-conductor cable.  On this trip Ed Corn helped finish off the conduit and drilled 2” access holes in the trailer floor and pedestal.  Bill installed the cable up the pedestal structure and terminated it in the terminal box above the control deck.  He also terminated the other end on the synchro panel in the comm trailer.  The azimuth synchros were hooked up and they worked.  One problem remains with the fine azimuth synchro.  The Elevation synchro connection on the dish will be made in a future trip.

Pointing System 1: Bill and Dave examined what would be needed to complete system 1.  Bill has a linear power supply in the works to replace the noisy switcher.  He also has an amplifier and watch dog circuit for the control function in progress. Dave suggested removing the system 1 box on the next trip and bring it back to Colorado Springs to install these and other software modifications for Glenn to test.  Currently system 1 only has position feedback and no direct control.

Pointing System 2: System 2 currently has all the circuitry for full position reporting and tracking control. As reported last time, Bill is working to transfer programs between computers and working on the system 1 at home and will reinstall on the next trip.

Dish Restoration and Maintenance: Paul Berge came down Saturday afternoon and stayed for work Sunday. Paul checked our Synchro system and made some valuable suggestions. He worked on other maintenance items on the dish including making a rubber bellows and seal to keep the water and birds out of the multiple cables feeding down through the center of the azimuth axes.  He also started working on wiring and setting up the Elevation and Azimuth limit switches.

Other Items: Dave Molter finished the tear out of the 12-foot fiberglass dish and support concrete from Sue’s yard in Sugar City.  He transported it down to the site on his trailer and unloaded it for future use.   Bill and Dave pulled a vertical antenna and base insulator out of the pedestal and loaded it on Dave’s trailer.  Dave returned the antenna to Michael Lowe in Pueblo who originally brought it to the site.

While we worked on Saturday, there was harvesting in the surrounding fields. 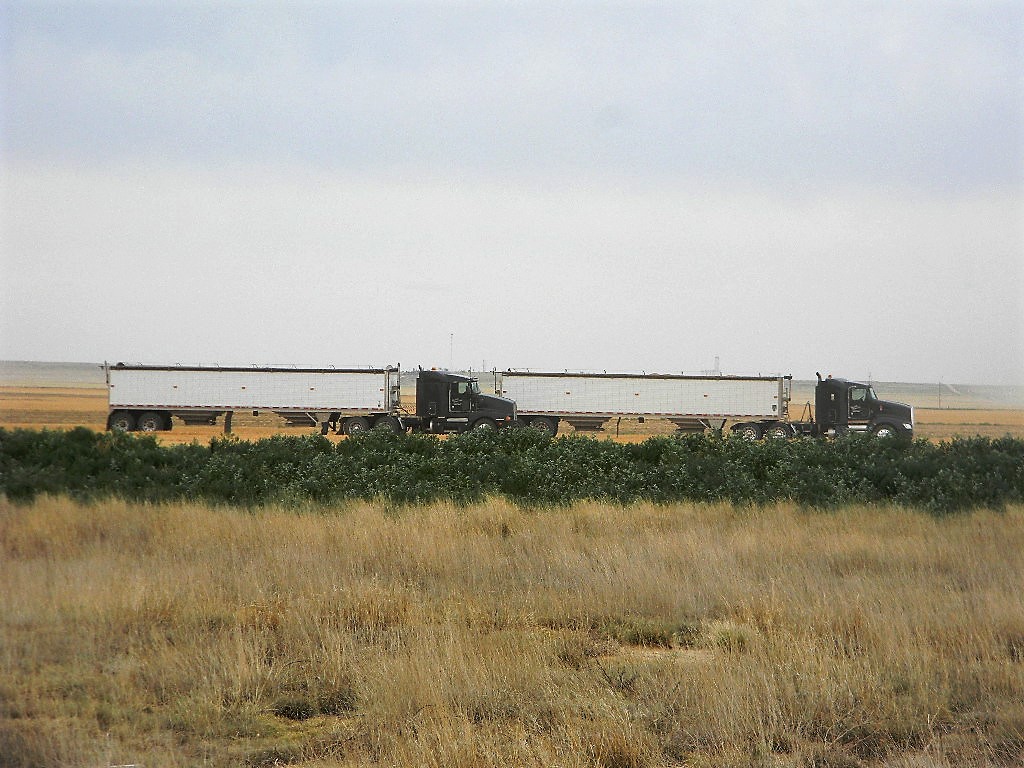 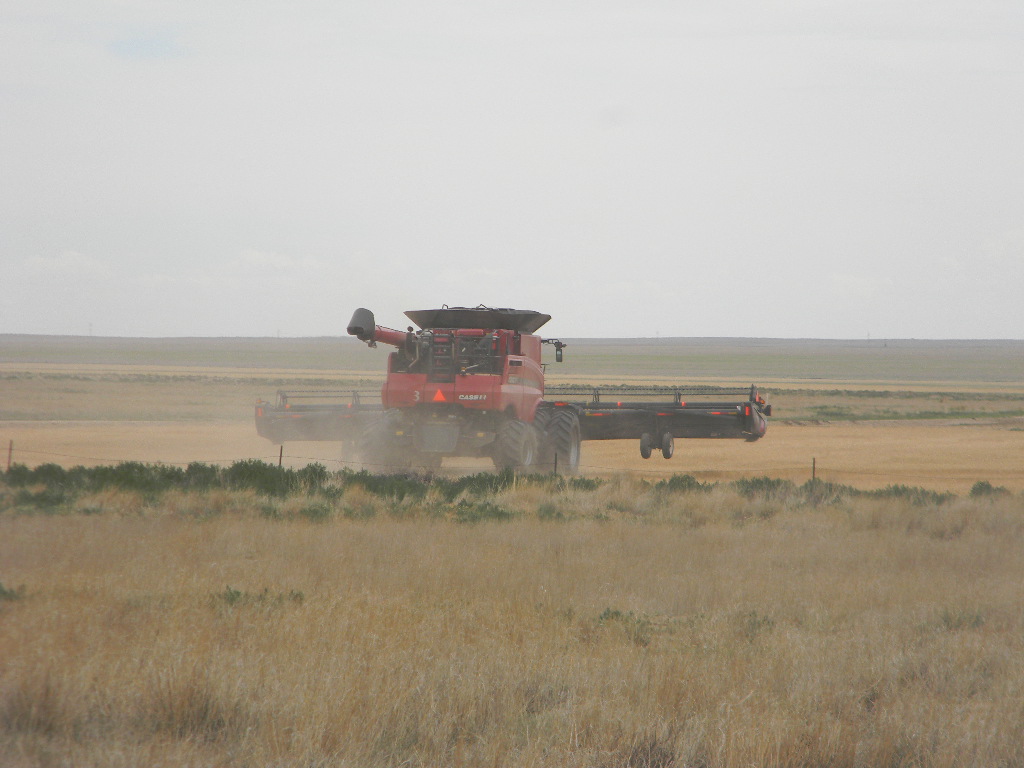 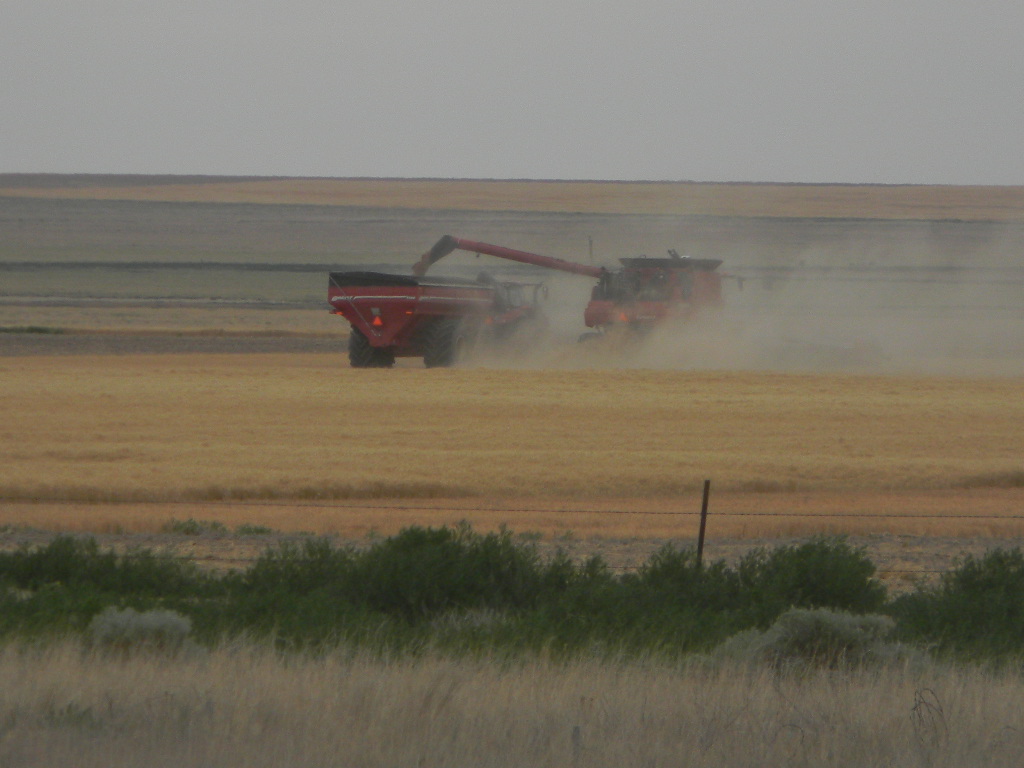 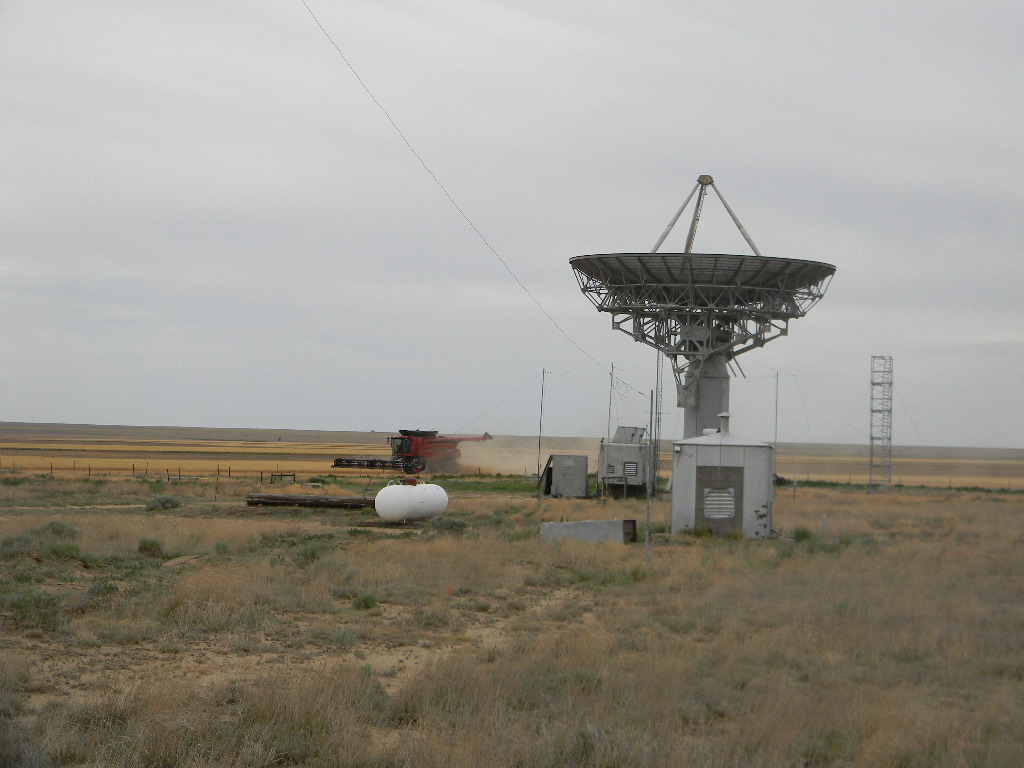 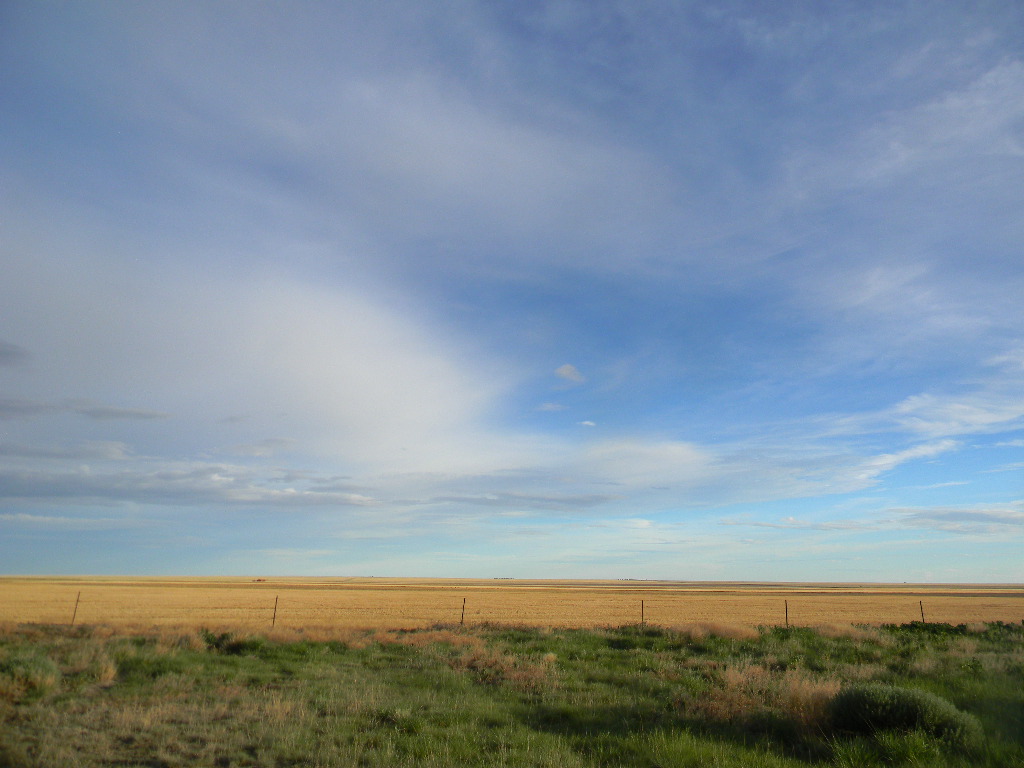 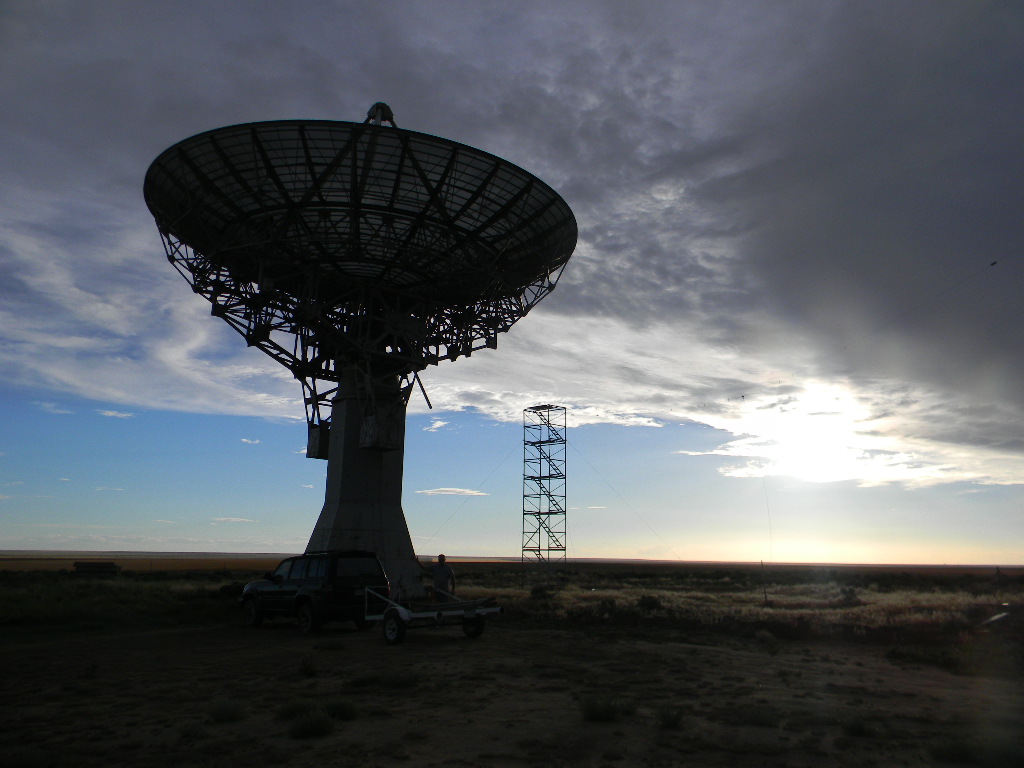