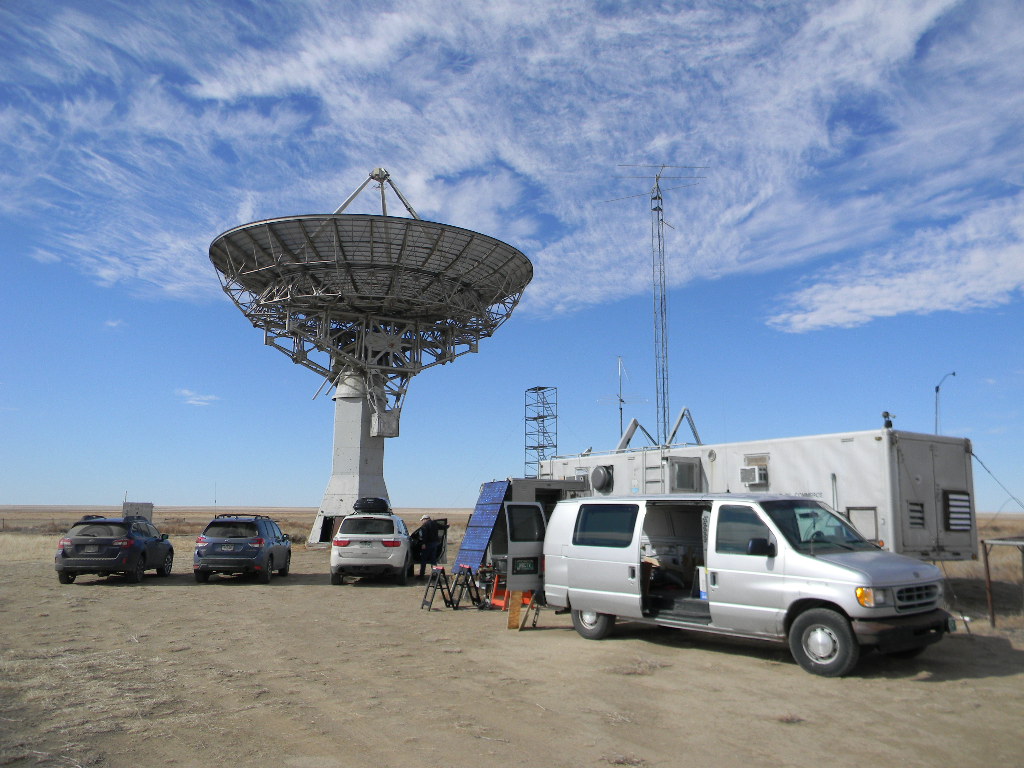 We worked at the Plishner antenna site in Haswell on Saturday February 15, 2020. We had three projects:

1. The major task of the day was an attempt at a science observing run of a circumpolar pulsar. This is one of the brighter puslars in the sky. And being circumpolar, it is always above the horizon, though it can still get relatively low to the horizon. The observing technique required continually pointing a the celestial coordinates and integrating the signal for at least a half hour. By integrating over time, the random noise tends to cancel more, leaving the actual radio source signal the time to accumulate and sum to a higher level than the noise floor.

2. Bob Haggart worked on completing the building of desk and shelf space in the Communications Operations Trailer. The additional space is actually important, as that gives us a means to organize and better utilize our work space, and not instead have items pile up randomly.

After the tower was raised back to vertical position, Bill and Gary slightly rearranged the positioning of the 80 meter dipole that is supported from a pulley on the tower. The repositioning separated the dipole with better clearance from other nearby wires

Rich Russel processed the observation data, but the processing did not bring out the pulsar. Troubleshooting is a topic at the February Science Meeting. Meanwhile, the System 1 antenna pointing system worked well.

The group finished up the work well before sunset, so that traveling back with the sun setting was not a significant issue. We had good weather for this trip, for a winter day in February. Our temperature was in the 40s F, which was actually midler than the 30s in Colorado Springs. And our wind was light.

The next DSES Engineering & Operations Meeting will be on Monday June 14th, 2021, at 18:30 (6:30PM) Mountain Time (US and Canada) on Zoom. An email notification with the link was sent Sunday morning. Please contact us if you need further information information(at)dses.science.

We now have posted the presentation slides and video of the DSES Science Meeting of May 24, 2021. Our Science Lead Rich Russel gave us a presentation about the science behind the Event Horizon radio telescope group's first successful imaging of a black hole (in M87) in 2019.

Skip Crilly wrote a paper which is now in ArXiv An Interstellar Communication Method: System Design and Observations, 8 May, 2021. The paper is available in PDF on our website on our Publications Page, Paper #32.

The DSES Science Meeting presentation slides of April 26, 2021 by Rich Russel are now posted on our website. (Video added May 3.)

Our Minutes from our 2021 Annual Membership Meeting of April 19, with video, is now posted. Minutes by Bill Miller.

Elected this year to the DSES Board of Directors are:
Floyd Glick
Ray Uberecken
Don Latham
Floyd Glick is continuing his service after serving the past two years. Bill Miller and David Molter are retiring from serving. The elected members join Gary Agranat, Myron Babcock, Bob Haggart, and Bob Sayers who have been serving since last year. The Board of Directors serve for two years. Please welcome in the new Board, and please reach out to them as needed. Thank you each one for your service.