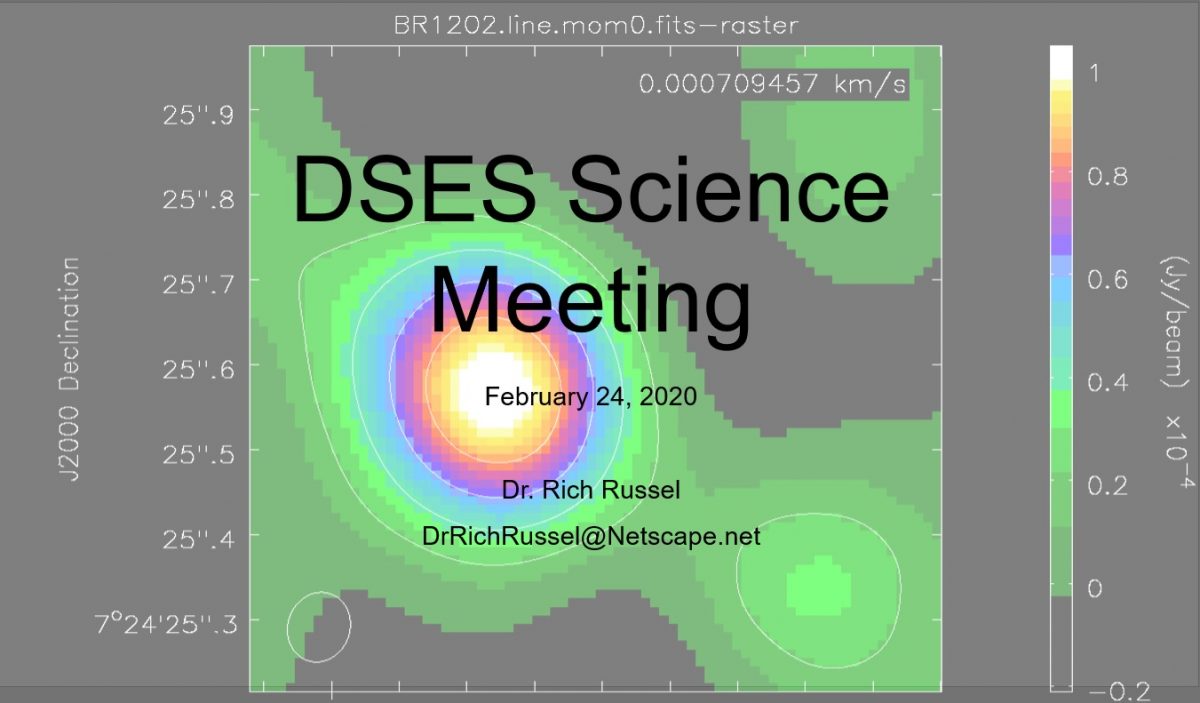 Our Deep Space Exploration Society Science Meeting was held on February 22, 2020, at the home of Dr. Richard Russel.

The Science Meeting had three major topics of discussion:

These are the slides from the meeting, written by Dr. Russel: DSES-Feb-2020-Science-Meeting.pdf

Some additional background and details:

We have been monitoring the news about the apparent magnitude of the star Betelgeuse dimming during the past few months. Betelgeuse is a red supergiant star in its late stages of stellar evolution. As such, it is expected to become a Type II supernova some time within the next 100,000 years. Its recent dimming has piqued interest that perhaps the star may soon become a supernova. If that were to happen, DSES is prepared to observe it immediately. We are keeping aware of notifications from the SNEWS (Supernova Early Warning System) network [https://snews.bnl.gov/], which would send an alert if indicator neutrinos were detected.

Dr. Russel recognized that another possible physical mechanism that could cause the apparent dimming would be a dust cloud coming between the star and us along our line of sight. The cloud could be interstellar, or it could be a product of the star itself and close to the star. There is evidence for a possible cloud in existing VLA (Very Large Array) observational data, which we have available to analyze. In the imaging data, what could be an imaging artifact nonetheless shows structure, and could instead be an actual physical cloud. In the slides, Dr. Russel showed calculations of how the cloud would be expected to move if it is the culprit of the current dimming. At the meeting we developed a set of observational tests we can conduct to test our hypotheses about if there really is a cloud dimming Betelgeuse.

The second topic of discussion was about troubleshooting our attempted observing of a pulsar with our 60-foot dish antenna the previous weekend. The analysis produced no results. But there can be several possible reasons for the problem.

What we did think did work was the accurate pointing of the dish antenna with the System 1 software, to well within the beam width limits of the 408 MHz antenna feed.

The third topic was about the upcoming Society of Amateur Radio Astronomers Western Conference [http://www.radio-astronomy.org/node/323] in late March in Socorro, NM. DSES will be presenting several papers there.

The Pikes Peak Regional Science Fair was held the previous Saturday at UCCS. Bill Miller and Gary Agranat represented DSES as special judges. Tony Bigbee served as a general judge for the Fair. Bill and Gary awarded Outstanding and Honorable Mention awards in both the Junior and Senior High School categories. Bill presented the awards at the Fair’s awards ceremony, held the evening after the DSES science meeting. The Science Fair and the awards will be a topic of another post.