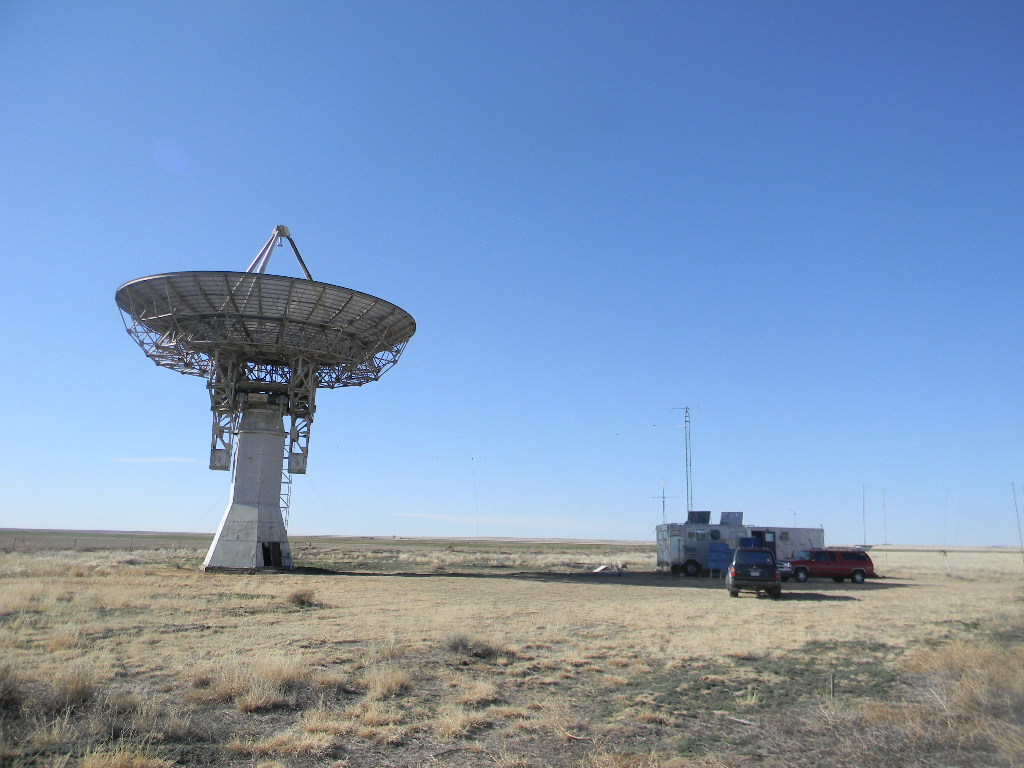 On Saturday March 17, four of us were at the Plishner antenna site: Steve Plock, Ed Corn, David Molter, and I (Gary Agranat).

And before I say anything more, I want to point out that the site has had much activity over the past few months. Full commercial power was installed and the site now operates using that. A number of simultaneous observing runs were made with Skip Crilly at the 40 foot dish of Greenbank Observatory in West Virginia, 1257 miles distant. More about that later.

Plus, a number of equipment upgrades to the site were made. Many of those enable the joint observations, yet also enhance our ability for observations on our own. For example, a few weeks ago a 100 meter long fiber optic cable was installed from the antenna feed (at the focus of the dish) to the receiver at the communications trailer. In order to install it, a 50-foot lift was rented. However, the installation had to be delayed a day because the originally planned day was too windy. Replacing the coax with fiber optic cable eliminates a significant source of electrical noise to the receiver. This is very important for radio astronomy observing.

Effort has been ongoing as well to troubleshoot and make work our two independent antenna pointing control systems. One system was designed by Glenn Davis and David Molter, the other by Ray Uberbecken and Ed Johnson. Both seem to be good workable solutions, and we will have one back up the other. An ongoing problem we have been troubleshooting is electrical noise.

Meanwhile, Rich Russel and Skip Crilly traveled to the Society of Amateur Radio Astronomers Western Conference at Stanford University in California, to give talks based on papers they wrote. More detailed information about these other activities are already, or will be, posted on our website.  And so we have been very busy, and doing much. Today’s activities are a moment in a bigger story.

This is our connection to commercial power at the entrance to our site. New utility poles and a power line were erected, which connect to an existing power line about a mile to the north. 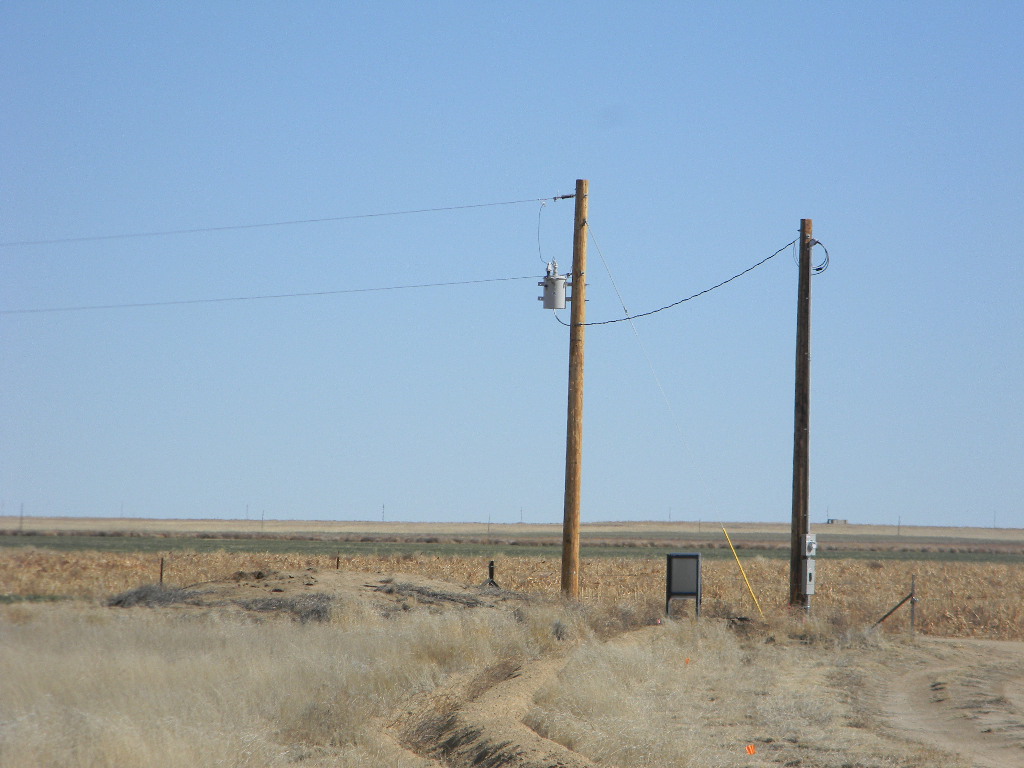 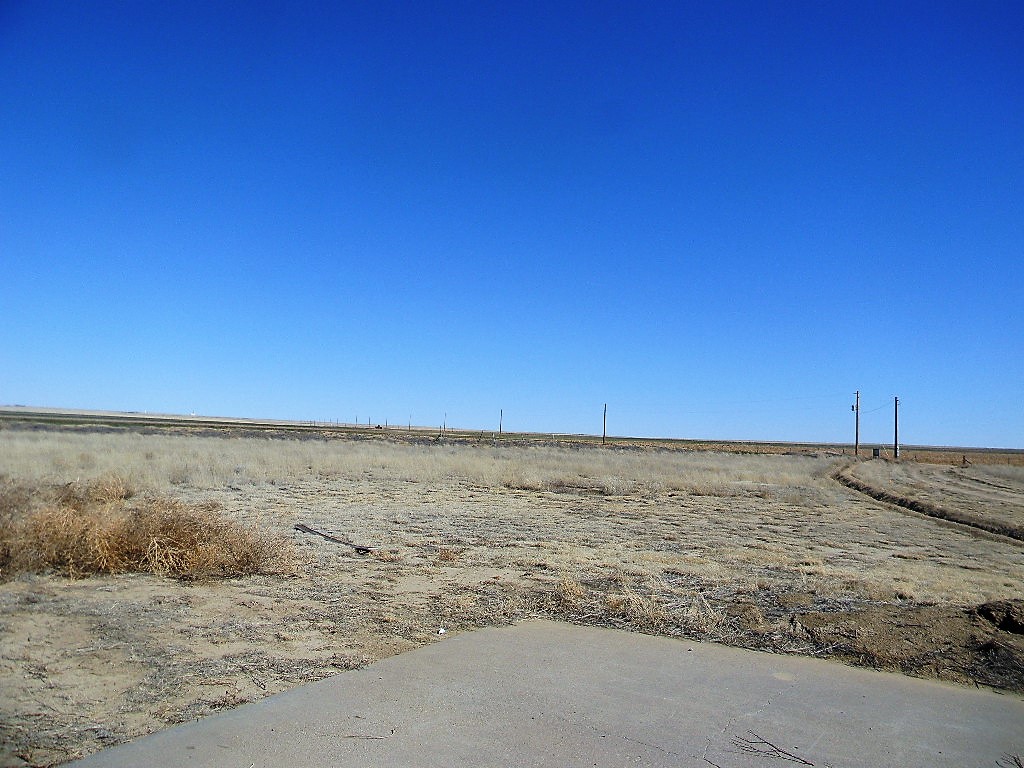 On this trip, Ed brought an additional roll of fencing. David Molter and I (Gary) then completed fencing the periphery of the bunker entrance ramp. The bunker when it was originally built in the 1950s had a fence, but it deteriorated away since. Without a fence, tumbleweed accumulate in the ramp when the winds are strong enough. And it is a chronic, time consuming task to clear our the entrance. The fence is a worthwhile accomplishment.

The last part of the fencing job was to create a moveable gate across the ramp entrance. Ed, Steve and David created an improvised gate with the fencing, and with spare re-bars (steel bars for reinforcing concrete), and hooks. 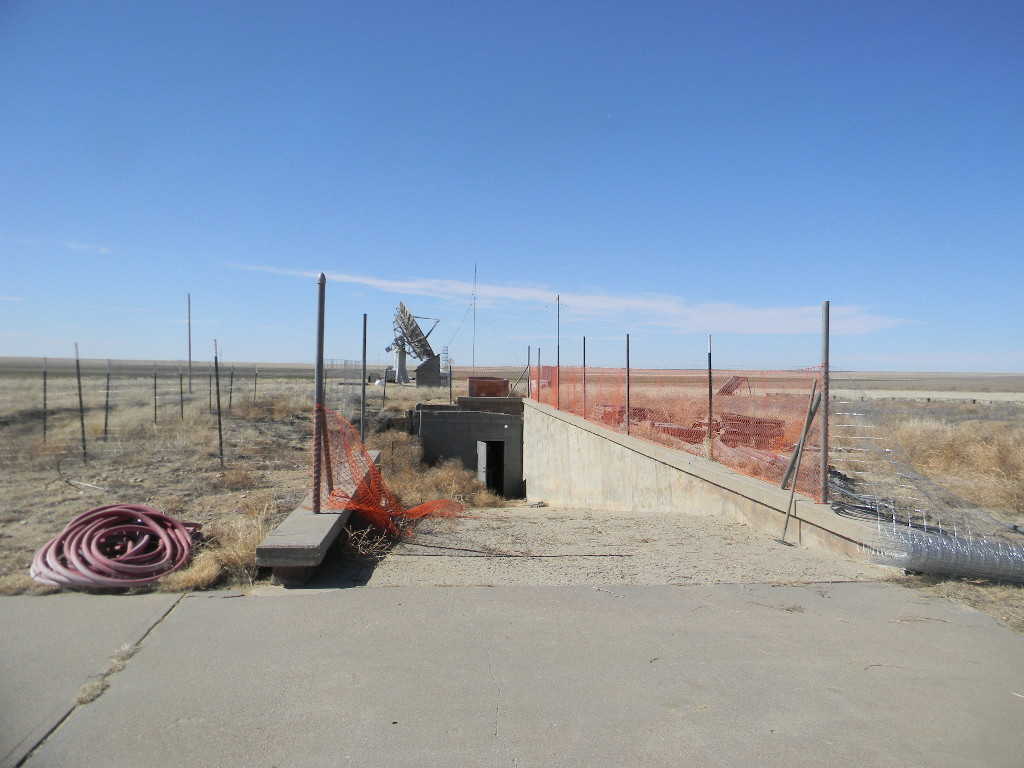 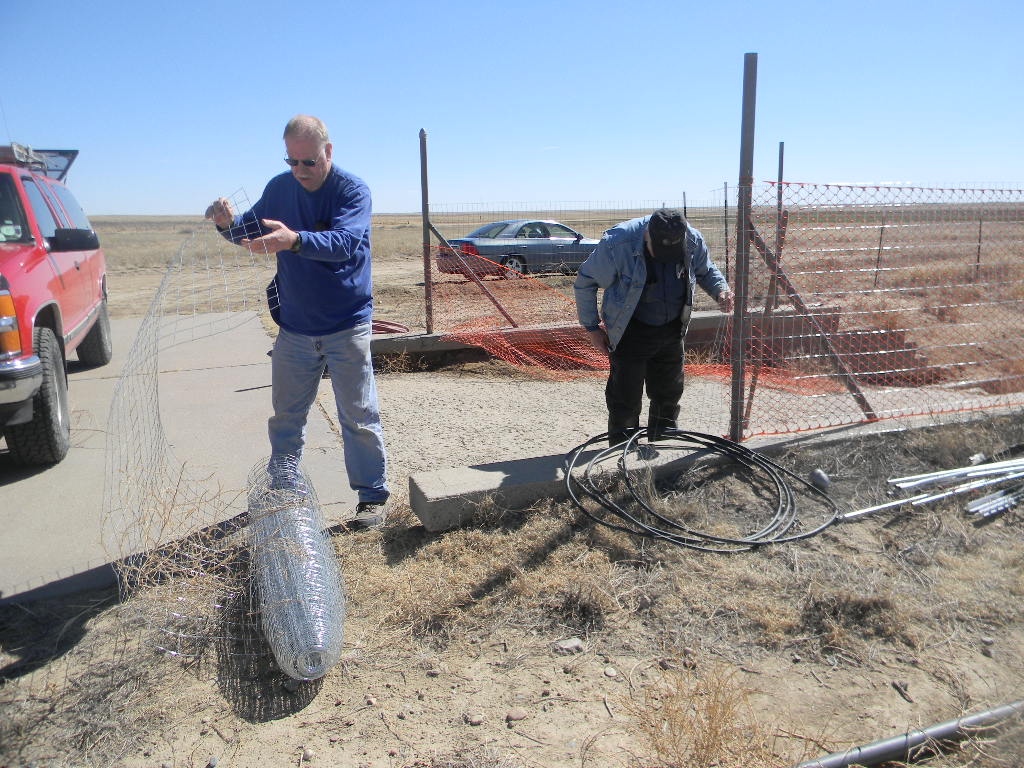 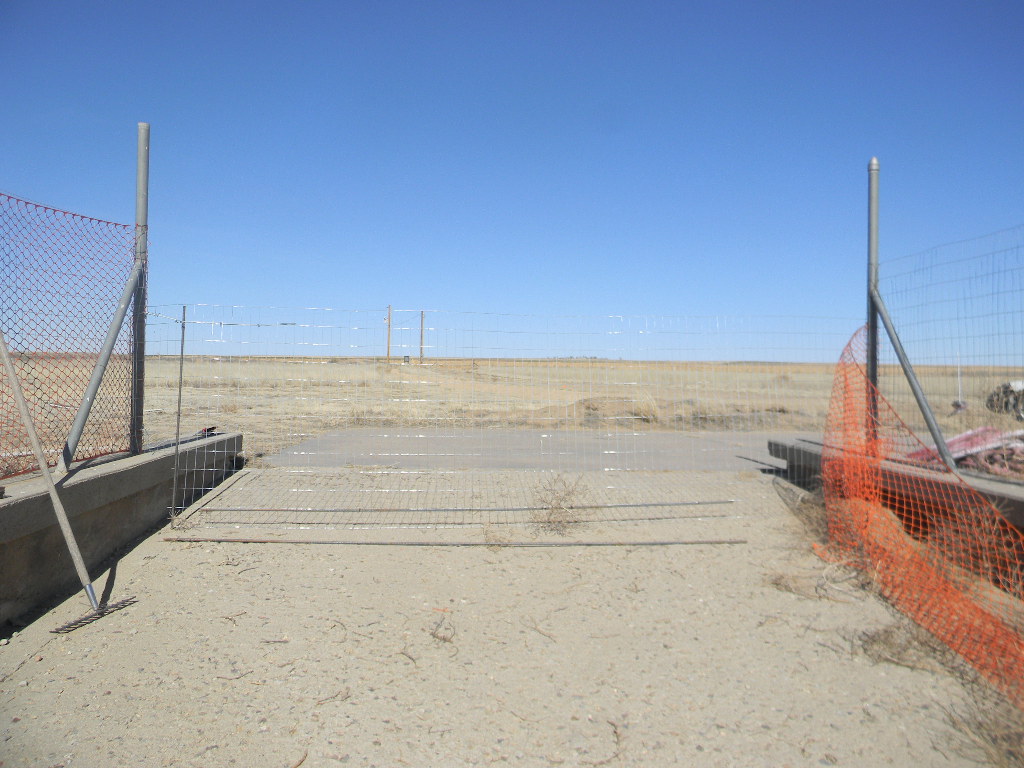 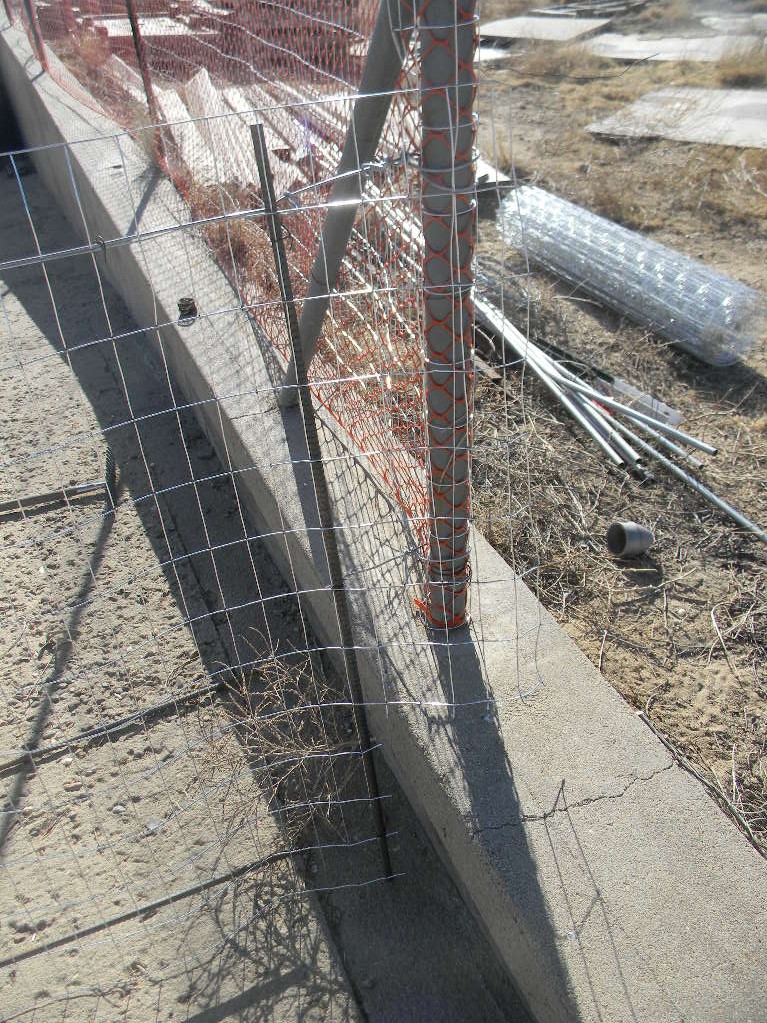 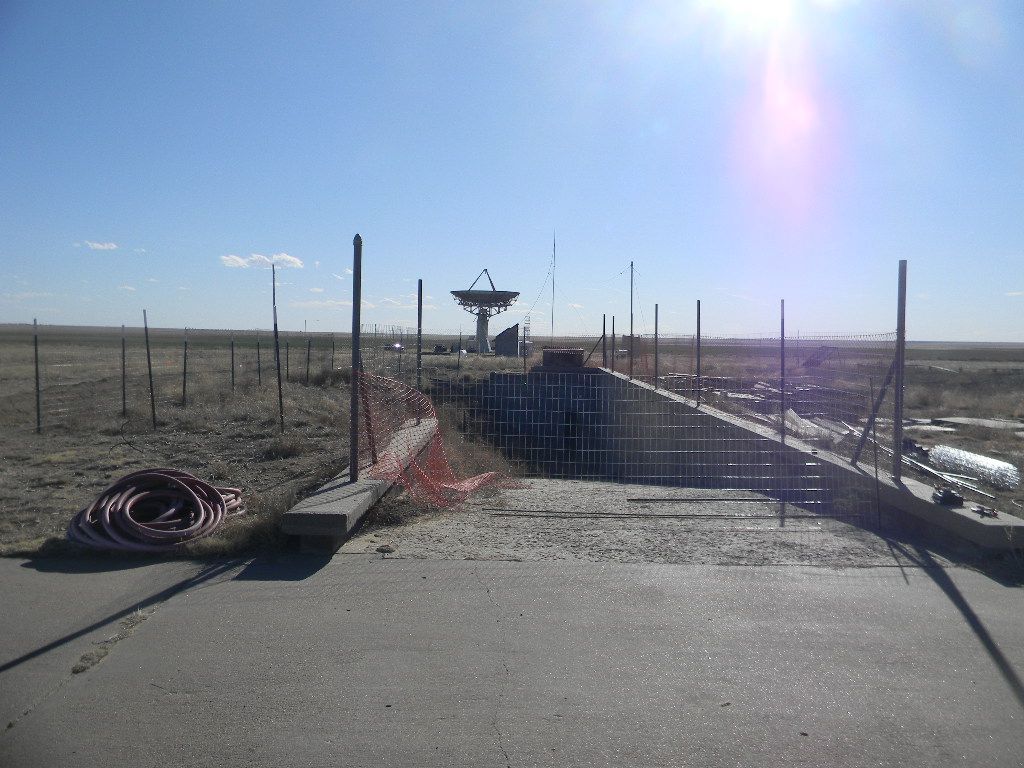 A used Hustler 5-BTV vertical ham radio antenna was donated to us. We plan to erect it near the bunker. Its coverage is the 10, 15, 20, 40, and 80 ham radio bands. I inspected the parts, and found we just needed a few “spider” radial parts for near the top of the antenna, to replace worn or missing parts. As of this writing, David got us replacement parts, and we are ready for the next steps for installation. An existing pipe in the ground might be used to mount it, or we may put in a new one. Given the wind conditions, we will guy the antenna with non-conducting cable. 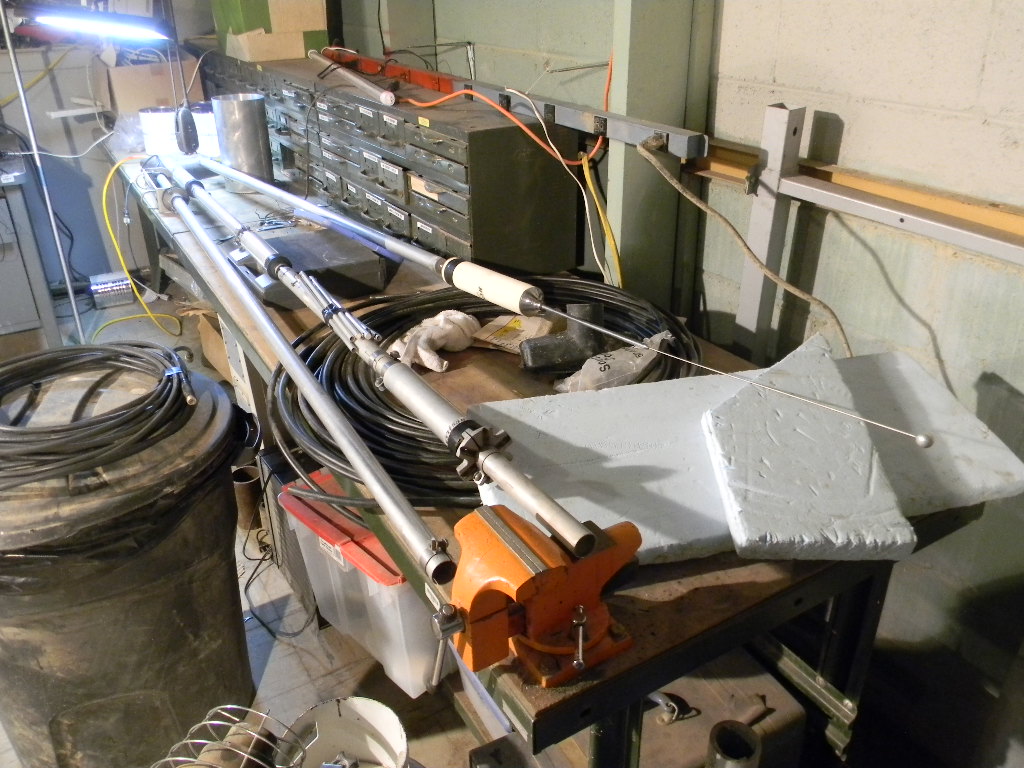 Ed has been installing an internal phone system on the site. Phones are being installed at the pedestal, com trailer, and bunker. Dialing a number will ring an individual phone. On future trips, Ed will also install a VHF radio, connected to the phone system, so that one can “call in” from outside using the ham VHF 2 meter band.

Steve and David worked on the pointing control system. David wrote these details for us:

For the elevation/azimuth work that I did last weekend:  I used a bubble level to set a horizontal line, then zeroed the bubble level/inclinometer that I brought. Steve and I moved the mount to as close to 0 degrees elevation using the vertical part of the inclinometer by lining up the edges of the dish and sighting across them until they showed vertical from where we were standing on the ground.  The readout on the computer was minus 0.1 degree. I then took the digital inclinometer and zeroed it on the same bubble level. I took it up to the back of the dish and measured the elevation axles. The left axle measured minus 0.1  degrees and the right axle measured plus 0.4 degrees.  I then measured the horizontal beam on the left side as you are looking out the dish it measured 0.1 degree. I can’t remember if it was plus or minus. The same beam on the right side measured minus 0.7 degrees.  Steve then rotated the dish to point to the Haswell grain elevator He moved the dish until the feedhorn blocked the view of the elevator as I was looking through the bottom of the reflector.  I then checked the seam of the azimuth electronics box and it was lined up with the tower part of the elevator. Steve knows what the reading was. I didn’t observe the elevation lights when the dish was moving. I did observe that the 3/4 inch ‘liquid tight’ sealable conduit was secure at the elevation electronics box, and it ends about 3 feet into the tube where the wires go into the upper mount level.

I then started helping Ed troubleshoot the phone system.

Before I did the elevation observations, Gary and I put up the fence that Ed had brought down. We completed the run along the North East side to the end of the ramp. After lunch, Ed, Gary, Steve and I  built (designed, created, hodge podged, jury rigged, slapped together) a gate out of the same fence material. Now the ramp is surrounded by a ring of steel (fence that is).

During the day we had two visitors from Las Animas: Sharon Branch and her friend Cheri Martinson. Sharon is a member who joined last November. I gave them a nice tour, with some background of the history and science. Steve then took them up the dish antenna. Cheri later wrote us a delightful letter, and she became a member too. 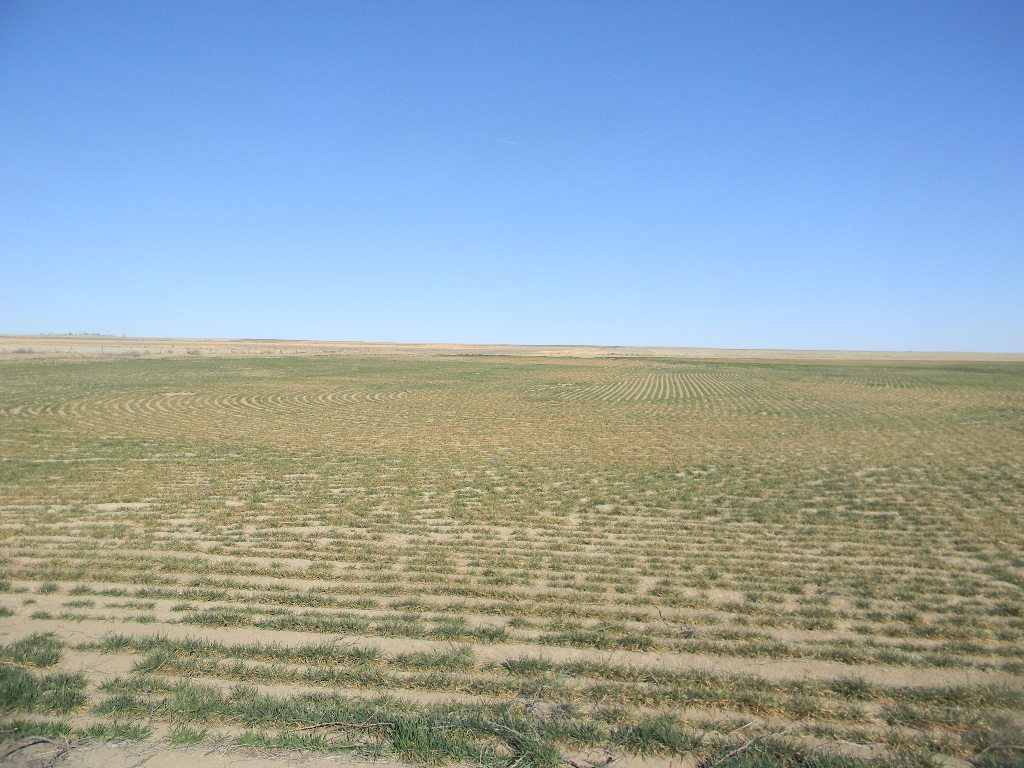 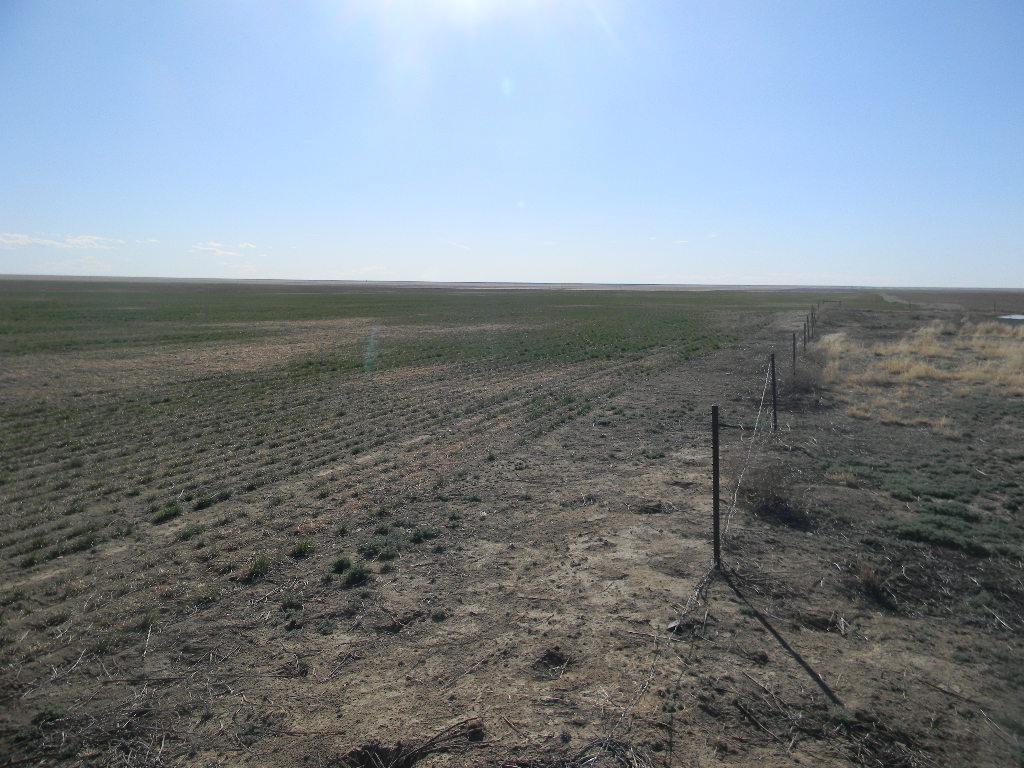 Late in the afternoon two photographers came who had arranged to work overnight, in order to photograph the dish with starry background: Mike Cunningham, who has become a member, and a friend.

For the past few months we have been doing a series of joint observing runs with Skip Crilly, who uses the 40 foot dish antenna at the Greenbank Observatory in West Virginia. These observations are for SETI (Search for Extra Terrestrial Intelligence). However, a test observation also detected the supernova remnant NRAO 5690. The detection and measurement of NRAO 5690 is probably our first real confirmed detection of an astronomical object with the Plishner 60 foot dish antenna. These joint observations are the subject of Skip’s talk at the SARA Western Conference at Stanford.

Now that he has given the talk, we have posted a recent revision of his slides on our Publications Page on our website, in the Science Section. See: “Geographically-spaced Synchronized Signal Detection System”, by Skip Crilly.

The next set of joint observations are scheduled for April 9. Several members will be at the site to carry out observing, and to also continue site work in between observing runs (which last about 30 minutes). 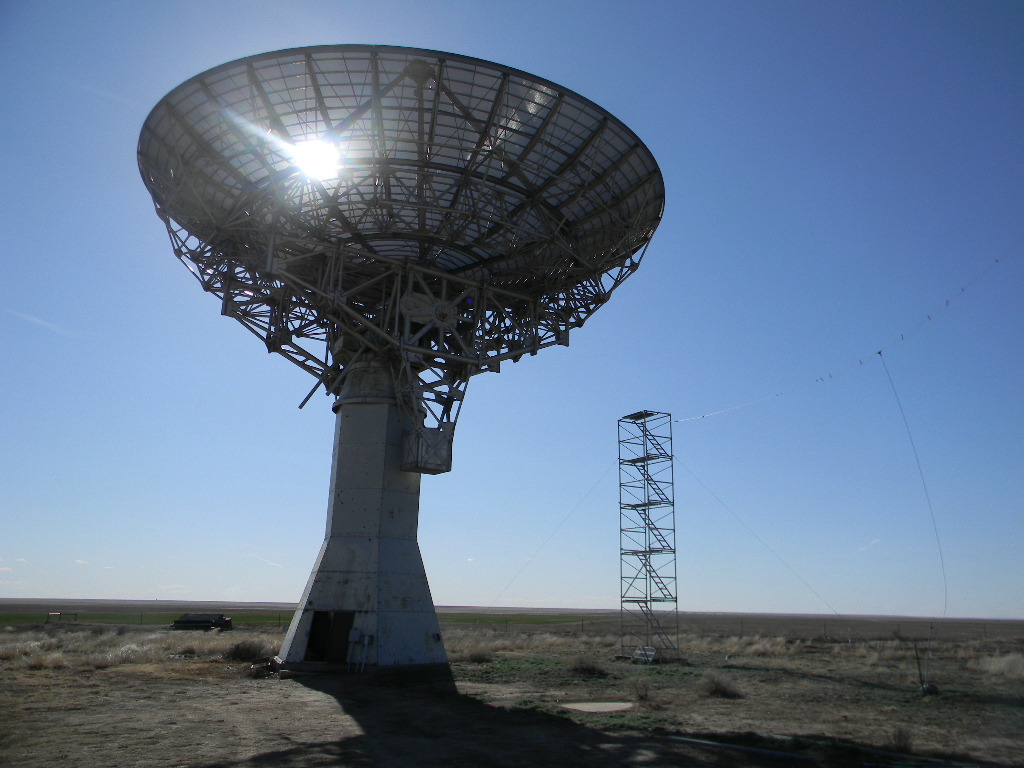 At this week’s DSES Science meeting, Rich Russel gave us details about the SARA Western Conference, including his paper. Rich also discussed bringing the Jupiter-Io experiment “Radio Jove” back online, now that Jupiter is placed well again for observing. And he discussed a week-long “Synthesis Imaging Workshop” (on radio telescope data imaging) that he will be attending. The dates are May 16-23, and the location is near the Very Large Array (VLA) in New Mexico. He also plans to attend the main SARA conference in Greenbank, West Virginia this summer.

The DSES Secretary should be sending formal announcements soon.